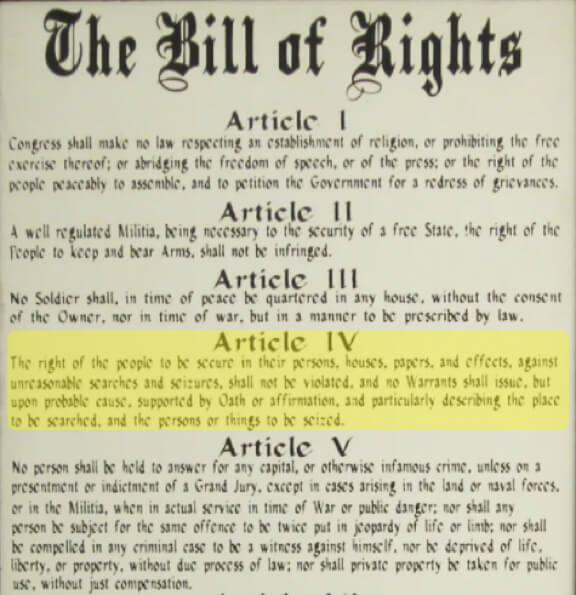 A new piece of legislation, being dubbed the “The Fourth Amendment is Not For Sale” law, would ban law enforcement agencies, such as police departments, from purchasing your personal data from data brokers. As a reminder, the 4th Amendment protects the people from unreasonable, and warrantless, searches and seizures, and says:

Amendment IV The right of the people to be secure in their persons, houses, papers, and effects, against unreasonable searches and seizures, shall not be violated, and no warrants shall issue, but upon probable cause, supported by oath or affirmation, and particularly describing the place to be searched, and the persons or things to be seized.

“…unreasonable searches and seizures… no warrants shall issue, but upon probable cause … particularly describing the place to be searched, and the persons or things to be seized”

What this means is that in order to have access to your person, or your personal property, for the purposes of searching or seizing it, they must have a warrant, and to get that warrant they must convince a (presumably) neutral judge of their great need for that property.

But some law enforcement agencies have been endrunning and ignoring that constitutional requirement, and instead paying data brokers to sell your personal information to them.

The Fourth Amendment is Not for Sale legislation is being sponsored by Senator Ron Wyden, of Oregon. Its name refers to agencies not abiding by the 4th Amendment’s requirement of a warrant in order to get at your personal information if they are willing to purchase that information from a data broker.

Lawmakers have known for quite a while that law enforcement agencies have been going out and buying individuals’ private personal information – information for which they would otherwise be required to get a warrant.

According to Sen. Wyden, in an interview with Digital Privacy News, the legislature has been following the issue of law enforcement agencies purchasing personal data from data brokers for “quite some time.”

In an interview with the Verge Sen. Wyden explains that “I think we’ve really reached the point where you have so much data floating around that governments can essentially buy their way around the Fourth Amendment,” adding that “We’ve seen all about these shady data brokers selling information about Americans to the government. I will tell you, I’m on the Intelligence Committee. I’m not going to get into anything classified. I think what you’ve read about and heard about is just the tip of the iceberg. And I don’t think Americans’ Constitutional rights ought to vanish when the government uses a credit card instead of a court order.”

In other words what Senator Wyden is saying is that right now if the police, or the FBI, or another law enforcement agency, wants your search history, your location data, etc., all they need to do (and have been doing) is whip out their credit card and buy it from a data broker, even though, according to the 4th Amendment, they are required to convince a judge that they really need your personal, private data.

Not only if they want to, but apparently, according to him, they already are doing that. And have been.

The ‘The Fourth Amendment is Not for Sale’ legislation has not yet been introduced, so we can’t give you the text of it yet, but watch this space, as we expect it to be out within a few weeks.

In the meantime, if you have input that you’d like to give Senator Wyden, you can contact Senator Wyden here.

All About the California Consumer Privacy Act of 2018 - California's Own Version of GDPR: An Overvie...
NASCAR Admits It Abused The DMCA To Get YouTube To Remove Wreck Footage Posted By Tyler Anderson
Hate Being Added to Email Mailing Lists without Your Permission? Now is Your Chance to Let the FTC K...
Full Text of President Trump's Executive Order Against Twitter, Facebook and Other Social Media
Amazon Boots Vendor Based on Fake Take Down Notice from Fake Law Firm
Facebook Post Sends Martin Shkreli to Jail
Tough New Law Regarding Selling Your Personal Data Goes Into Effect in Vermont
The Truth about the FBI USPS idHSC Voluntary Fingerprint Submission Program
24shares