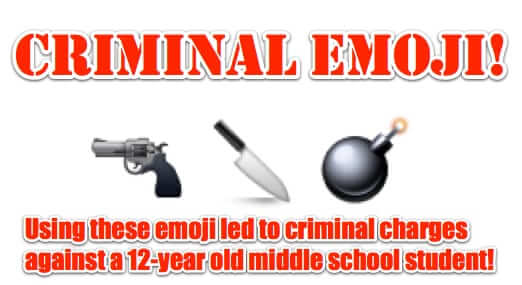 A picture is worth a thousand words, the saying goes. So how about 3 emoji? According to Virginia prosecutors, three emoji are worth criminal charges, even if the emojier is only 12 years old, and the emoji posted on Instagram.

In the middle of December, a student at Sidney Lanier Middle School, in Fairfax, Virginia, posted the following to her Instagram account:

According to the Washington Post, a school resource officer, or “SRO” (a law enforcement officer assigned to a school) at Sidney Lanier Middle School became aware of the post. The SRO immediately started interviewing students, and also “sent an emergency request to obtain the IP address of the user associated with the Instagram account.”

A warrant was obtained, and the investigation led to the unnamed 12-year-old, who freely admitted that she had posted the Instagram post which she had posted under the name of another student.

According to the Post, the girl’s mother said that her daughter had done it in response to being bullied. “She’s a good kid,” the mother told the Post. “She’s never been in trouble before I don’t think it’s a case where there should have been charges.”

And, indeed, through a spokesperson the Fairfax school district said that they did not think that the threat was credible.

Prosecutors, however, see it differently, and the girl has been charged with threatening the school, and also with computer harassment.

This is in fact only the latest in a string of cases having to do with teens and tweens using ‘threatening’ emoji, and getting into legal trouble over it.

Last year 17-year-old Osiris Aristy was arrested and charged with making terrorist threats, and his case went all the way to the Grand Jury, over his Facebook posting featuring gun emoji pointing at an emoji of a police officer.

In Aristy’s case, the Grand Jury declined to indict, and his attorney said that “I don’t think he actually threatened anyone. He expressed a dislike of the police based on a particular experience, but never threatened to act on that.” 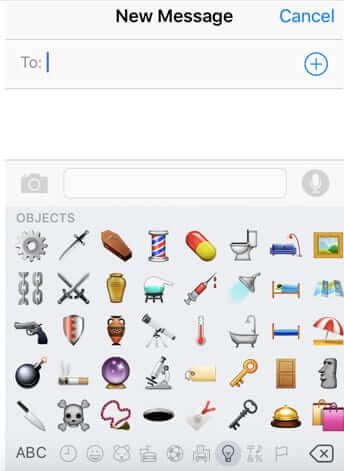 Lest you think that refraining from using emoji, and instead going all old school, and using the traditional ascii-based emoticons, will protect you from the long arm of the law, think again.

In the case of Jesse Enjaian and Renée Schomp, lawschool classmates at the University of Michigan during their first year, Schomp apparently became disenchanted with Enjaian by their second year. Enjaian wrote to her trying to discover what had changed, and eventually Schomp wrote to Enjaian instructing him to cease all communications with her, and to never communicate with her again. In addition, Schomp told campus police that she felt threatened and intimidated based on “communications” from Enjaian through email and Facebook that “made her increasingly uncomfortable and worried.”

Text messages then sent by Enjaian to Carrie Cushing, a mutual friend of his and Schomp’s, indicated that he hoped Schomp “likes deep dark pits of depression because [he, Enjaian, is] a petty bastard”, and he included an emoticon of a tongue sticking out ( :-P ) at the end of the sentence.

The campus police executed a warrant, seized Enjaian’s computer and other electronic equipment, but never prosecuted, and eventually returned Enjaian’s property to him. Enjaian then sued both Schomp and the university police, and part of his claims had to do with protected speech, and that they should have known his statements were not threatening because he put an emoticon of a tongue sticking out to demonstrate he was just kidding.

As the American Bar Association (ABA) Journal summarizes, “He argued his texts to a friend saying he wanted to make the classmate ‘feel crappy’ and experience depression shouldn’t have been taken seriously, in part because he used an emoticon indicating a stuck-out tongue. A federal judge in Michigan found the emoticon didn’t materially alter the meaning of the text.”

Similarly, as reported in that ABA journal, “a Delaware judge interpreted a winking emoticon used in a text in which a man boasted about surprising a woman by purchasing a plane ticket so he could be seated next to her on a flight to Paris. The man said the wink showed he was joking; the judge said the emoticon showed he was amused by the opportunity to harass the woman.”

So, what’s the lesson from all of this?

The lesson is, never put in writing – including electronic form, and even in pictograph form – something that could be construed as a threat. Even if you put a smiley face after it.

Pet Sitting Company Sues Customers for Posting Negative Yelp Reviews
About the New Internet of Things Cybersecurity Law That Passed Last Month
Proposed Law Will Fine Credit Agency Data Breaches, Establish Cybersecurity Office at FTC
Explained: Supreme Court Hands Down Internet Sales Tax Law of the Land in South Dakota v. Wayfair (i...
Man who Killed Wife, and Posted Picture and Confession on Facebook, Convicted of Murder
Explanation of What is Google LERS, Where to Find the Google LERS Portal, and How to Get Your Agency...
UK Report: Mass Interception of Citizen Data Vital to Security
Amazon Lawsuit puts Fake Reviewers in the Crosshairs
Share the knowledge