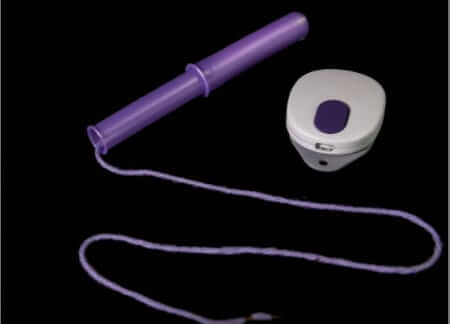 In a clear indication that the Internet of Things has gone too far, a brand new startup called TrackMyFlow (yes, really) is marketing a smart tampon (yes really) and ‘tampon monitor’ that lets you know when your tampon is about to overfloweth (something that any woman anywhere does not need an external gadget to tell her). Track My Flow provides both a smart monitor, and the my.Flow app, along with the smart tampons (with crazy-long strings – more on that later), and they promise that they are “working hard to provide a solution to menstruation mortification.” (And if those words made you squirm, you may want to stop reading here.)

Honestly, we thought that the Internet of Things (IoT) had reached a tipping point with the remote plant watering system, but clearly we were wrong.

The my.Flow app in conjunction with the smart tampon and tampon monitor is basically like the idiot light on your dashboard that tells you when your oil is low. It’s called an ‘idiot light’ for a reason – because you should be checking your oil yourself, and if you aren’t, you’re an idiot for needing your car to tell you that you’re low on oil. Similarly, if by your third or fourth period you don’t recognize that familiar feeling of tampon saturation, well.

Still, there is a certain segment of the population that relies on the oil-low idiot light, and we are sure there is a certain segment of the population who will be happy to rely on the TrackMyFlow smart tampon and tampon monitor, and the my.Flow app. Our concern is that it is one more piece of technology that will actually dumb girls down, and keep them from learning how to be in tune with their body rather than relying on technology. (Remember math before calculators? Yeah, neither do we.)

Being marketed as both a way to prevent embarrassing leakage incidents, and to prevent Toxic Shock Syndrome (TSS), the system works like this:

You insert their special smart tampon, and then you clip the tampon monitor to the string of the tampon, and clip the monitor to your waist. Then the smartphone app alerts you when your tampon starts getting too full. 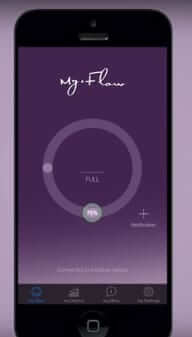 Why, yes we did. Because this tampon monitor not only comes with a string attached, but it’s an insanely long string, the other end of which is attached to the tampon that is all up in your lady parts.

That monitor – that is sitting on your waistband – is attached to your tampon!

Think about that for a minute. 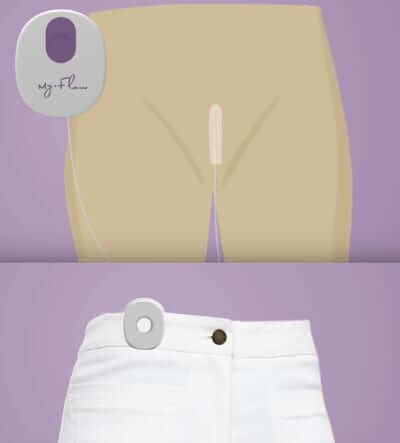 Even if you can get over the discomfort of a string going from your business out to your waistband – with a monitor clipped to the end of it (hey, that’s possible, after all, we’ve come to get used to thongs), who wants to wear a device that signals to the world that you’re on your period? (Much like those scented tampons they used to sell did.)

Oh, and hey, Track My Flow reassures us that “When you’re not using it, the monitor slides onto a keychain for easy storage, so it’s always there when you need it.”

So, even if you’re not wearing the monitor, you can proudly and publicly display your menstruation gadgets. 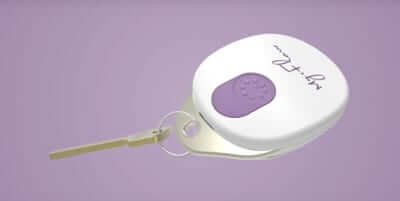 Now, their target market, it turns out, is adolescent girls, and people worried about Toxic Shock Syndrome (in fact they say that during market research, “a whopping 82% are ready to buy a product that would help them prevent Toxic Shock Syndrome and other menstrual-related complications”).

Here’s the thing – the incidence of Toxic Shock Syndrome – always relatively low, at least in the U.S., has been in decline, and, according to News Medical, “Data from research conducted over the period from 2000-2006, reported that the incidence of toxic shock syndrome now remains low and stable.”

So what about those adolescent girls? We mean, it makes sense that adult women are not going to buy this thing for themselves, because they’ve already figured out how to use a tampon, and when to change it.

Says [Page no longer available – we have linked to the archive.org version instead], “Many of those experiencing the whirlwind of puberty are left guessing how long to leave their tampon in; this leads to one of our worst middle school nightmares – having blood leak through new white pants or, much worse, toxic shock syndrome, which, although less prevalent than it once was, in extreme cases can lead to amputation and even death.”

Well, these girls aren’t going to be buying this for themselves – especially not with the hefty $50/month cost associated with it (we assume that this is for a month’s supply of the smart tampons – we couldn’t actually find this anywhere on their site, but it is stated in this article over at ChipChick – and P.S. a box of 50 tampons costs under $10, and a box of 50 pantyliners to wear in case of ‘accidents’ costs $5).

So really, it seems that the target market is the parents of those kids, which means, basically, the digerati and other well-heeled Silicon Valley type parents.

It’s not surprising that, as ChipChick points out, Track My Flow is “currently looking for funding.” And while we would say it would be surprising if they found it, it seems we’re brewing another tech bubble, so anything is possible.

What is surprising is that Track My Flow and the my.Flow app have won the MakerFaire Editor’s Choice award, and a place in the Live Sharks Tank Startups Showcase.

The other thing that is surprising is that of all of the co-founders (you can see the list [Page no longer available – we have linked to the archive.org version instead]), there is only one female, Amanda Brief, who seems to be driving this thing – presumably the men simply have to take her word for, well, everything. (You can read Ms. Brief’s experience of “strapping up to the printed circuit board” here.)

Could it be that the entire impetus for this is that she was, in fact, herself traumatized as a middle-schooler by that “worst middle school nightmare”, and has managed to convince her male co-founders of the need for this?

It will be interesting to see where this goes – or doesn’t.

So, here is our question: Would you purchase this product, and why or why not?

5 Cool Google Messages Features that are Helping People Stay Connected
Does Private or Incognito Mode Make Browsing Anonymous?
Is Pink Tech Really a Problem or Just Not a Solution?
Slow Internet Speed and What You Can Do About It
Samsung Advises that Smart TV NOT Always Listening and Sharing Everything
Save Money with Our List of the Best Free Streaming Services
With Google Photos Ending Unlimited Storage, Here Is How to Check How Much Space You Have Left
Browsing in Dark Mode: Why You Might Need to Turn Off The Light to Save Your Eyesight
Share the knowledge

Number of people who have enjoyed this article: 1,536