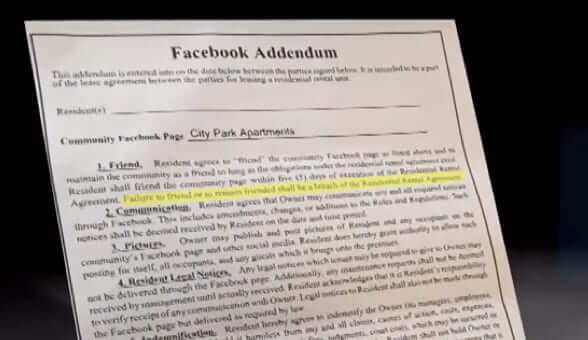 Failure to friend or to remain friended shall be a breach of the residential rental agreement.

This whole thing came to light when one City Park tenant, Jason Ring, posted the Facebook Addendum on his own Facebook page, and it caught the attention of one of Ring’s friends, who happens to work KSL TV in Salt Lake City, and KSL decided to run it as a story.

The story quickly spread, and rather than “liking” the page, as demanded, City Park tenants and others did quite the opposite, lambasting and ridiculing them on the City Park Apartments Facebook page.


Two things should be noted about that Facebook page: 1) There is some question as to whether that page, which stated that it was the “unofficial page”, was actually created by City Park Apartments, and 2) the story broke on Tuesday, May 31st, and by Tuesday afternoon the page was taken down (which suggests to us that it probably was administered by the apartment complex), but not before it was cached by Google. 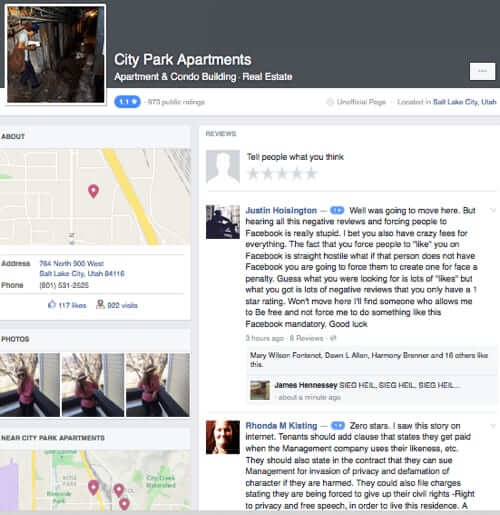 It’s pretty clear why they would want the page removed – the negative comments were piling up.

“Dear City Parks Apartments,” started one such comment, “a lease is a contract between two or more parties, unless the original lease has terms that allow you to modify the agreement in this manner then your tenants are under no obligation to fulfill your request. Your modifying the agreement may have already broken said contract. Basically your action is illegal. I am not a lawyer but I did play one on TV. Cheers! I would have given you less stars but there was no negative star option. I will add the option here … Negative 5 stars for being tossers.”

Another comment made clear how this move, and the ensuing negative publicity, may have hurt the complex: “Well was going to move here. But hearing all this negative reviews and forcing people to Facebook is really stupid. I bet you also have crazy fees for everything. The fact that you force people to “like” you on Facebook is straight hostile.”

And still another suggested that “Tenants should add clause that states they get paid when the Management company uses their likeness, etc..”

Now, clearly, somebody blew it. In fact, even their lawyer’s office explained, on Tuesday afternoon, in a conversation with CNet’s Chris Matyszczyk, that “As part of opening its pool and an anticipated pool party, City Park desired to provide some protection to its residents and its owners from usage of photos on its Facebook page from all community events, including the opening pool party. The “Facebook” addendum was provided to them to assist in that protection. That addendum went beyond the request and intent of City Park Apartments, and was not carefully reviewed to ensure that it met with their needs and requests. At no time was any resident in jeopardy of eviction or action from City Park for failure to sign the addendum or “friend” City Park Apartments. City Park has not implemented the addendum nor is it requiring its residents to execute it.”

Moreover, just as we were putting this article to press, the tenants of City Park Apartments received an official retraction and apology from the complex. 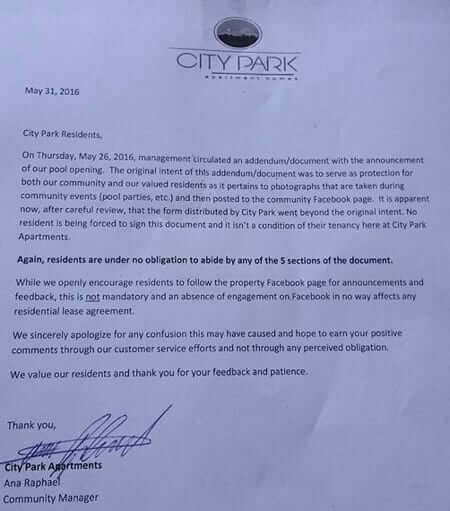 So, here is what we at the Internet Patrol think happened. We think (and remember, this is just conjecture, but it makes sense) that someone at City Park said “we need something to cover our using photos on our Facebook page,” and tasked someone to come up with a document to cover that.

Then that somebody found the Facebook Addendum, which – guess what – has been used elsewhere, by another apartment complex. We don’t know whether that other apartment complex is affiliated with City Park or not, but we do know that the document was available to be found online as early as April 8th – because we found it here, and it’s clear that City Park got it from somewhere, and used it, verbatim and, as their own lawyer’s office points out, without it being “carefully reviewed to ensure that it met with their needs and requests.”

So, class, what is the lesson to be learned here?

Here is the full text of the so-called “Facebook Addendum”:

2. Communication. Resident agrees that the owner may communicate any and all required notices through Facebook. This includes amendments, changes, or additions to the Rules and Regulations. Such notices shall be deemed received by the resident on the date and time posted.

3. Pictures. Owner may publish and post pictures of Resident and any occupants on the community’s Facebook page and other social media. Resident does hereby grant authority to allow such posting for itself, all occupants, and any guests which it brings onto the premises.

4. Resident legal notices. Any legal notices which the tenant may be required to give to owner may NOT be delivered through the Facebook page. Additionally, any maintenance requests shall not be deemed received by management until actually received. Resident acknowledges that it is Resident’s responsibility to verify receipt of any communication with Owner. Legal notices to Resident shall also not be made through the Facebook page but delivered as required by law.

5. Indemnification. Resident hereby agrees to indemnify the Owner (its managers, employees, agents, and affiliates) and hold it harmless from any and all claims, causes of action, costs, expenses, liabilities, including, without limitation, attorney’s fees, judgments, court costs, which may be incurred or alleged by reason of any usage by Owner of the community Facebook. Resident shall not hold Owner or its management or agents liable for any usage of the community Facebook. Resident further agrees that it shall not post or cause to be posted any negative information relating to Owner, the community, management, or any employees on any Facebook page which is open and available to the public or on the Community page. Resident further agrees to not post on any public forum or page negative comments relating to the community.

Yes Facebook is Down, Instagram is Down AND WhatsApp is Down on October 4th 2021
New Facebook Patent Lets Lenders Determine Whether to Give you a Loan based on Your Facebook Friends
How to Find Birthdays in the Facebook Mobile App
Talking Angela Facebook Message is a Hoax But There are Real Concerns
How to Turn Off or Disable Location Tagging and Tracking on Facebook
Should You Have a Social Media Prenup and Are They Enforceable?
Google Photos Will No Longer Back Up Images From Messaging Apps by Default
Reading the New York Times and Buzzfeed Directly on Facebook
Share the knowledge

Number of people who have enjoyed this article: 1,549