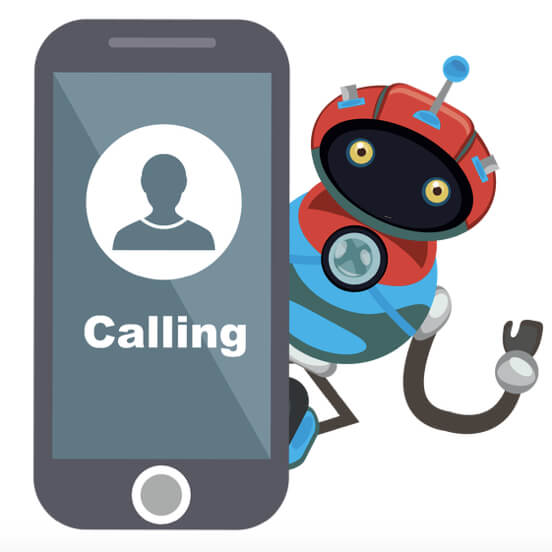 TL;dr: Robo Revenge requires that you provide a credit card for undisclosed auto-billing. Our publisher, Cyber Law and Cyber Security attorney Anne P. Mitchell, prefers this method using this self-contained kit, which includes information about the law, what to say to the robocallers to get their info, and templates for demand letters.

Robo Revenge, the app that helps you take robocall revenge on robocallers for all those spam calls (like this spam warranty call), and to make money doing it, has been in the news a lot this week. But is Robo Revenge actually available? Where can you find or download the Robo Revenge app? Here’s where to find Robo Revenge, but…should you? Turns out that to find and sign up for Robo Revenge you have to have a DoNotPay account, which requires that you give up a credit card.


There has been a lot of exciting, almost too-good-to-be-true press about Robo Revenge, which is offered by the DoNotPay so-called robo-lawyer service. The concept is that Robo Revenge helps you threaten to sue the robocallers who, knowing that they have broken the law, would rather pay up than deal with a lawsuit (current Federal law provides for fines of up to $1500 per robocall to a cell phone). DoNotPay’s CEO, Josh Browder, explained to Vice’s Motherboard that “All of the big companies like AT&T and Apple have failed to protect consumers. Consumers have to protect themselves. The only way the problem will end is if the robocallers start losing money every time they call someone.”

In theory the way it works is that you sign up for a disposable credit card number, through DoNotPay and the Robo Revenge app or portal, and then when you get a spam robocall you actually answer it, and engage with the caller, using the throw-away credit card if you have to give them a card. You collect as much information as you can (including information collected when the scammer tries to charge the burner credit card), and then DoNotPay helps you draft a demand letter to send to the scammer, citing the law and the fines for which the law provides, and because, again, the scammer already knows that they are breaking that law, they often would rather just pay up, especially as the filing of a lawsuit against them could lead to law enforcement agencies and the FTC discovering what they are doing. (For example, this robocaller was fined $15,000 and sentenced to 5 years in jail.)

According to the the Verge’s Jon Porter, “The nice thing about Robo Revenge is that it doesnXt require any new legislation or tech solutions to be implemented, it just makes people aware of their existing legal rights. ItXs not an entirely automated process (youXll still have to listen to the pitch and give the burner credit card details to a caller over the phone, after all), but maybe thatXs time well spent if you know you could get a check at the end of the process.”

Sounds like a nice premise, and even a nice promise. Except that DoNotPay won’t let you find the Robo Revenge service unless you sign up for a DoNotPay account which, as we mentioned at the top of this story, requires that you give up a credit card. Which will get charged $3/month. Which they don’t tell you until after you give up the credit card.

In fact, they don’t tell you anything before demanding your credit card – (the first is a demand for your mobile number so they can text you a “verification” code (verifying exactly what? We hadn’t given them anything yet)). Before even asking your name or other information, you are presented with this: 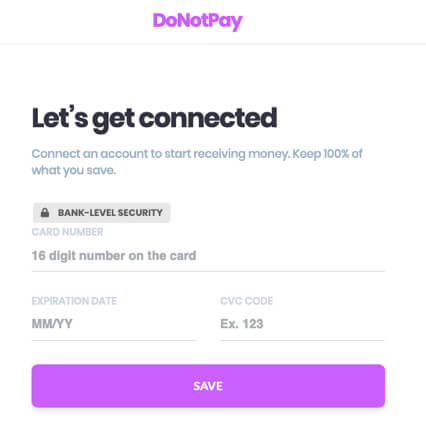 Ironically, even though the DoNotPay Robo Revenge service creates throw-away debit cards for you as an integral part of their service, they don’t accept such cards when requiring you to give up a card number to sign up. 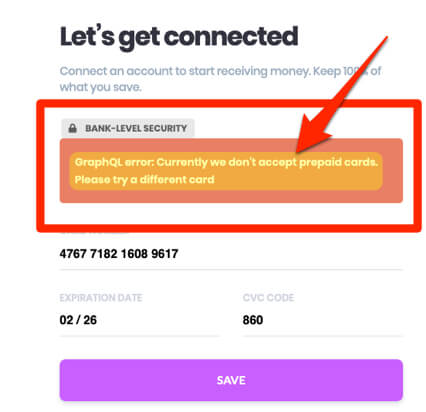 We, however, got a peek behind the screen, so you don’t have to. Here’s what DoNotPay says about Robo Revenge: 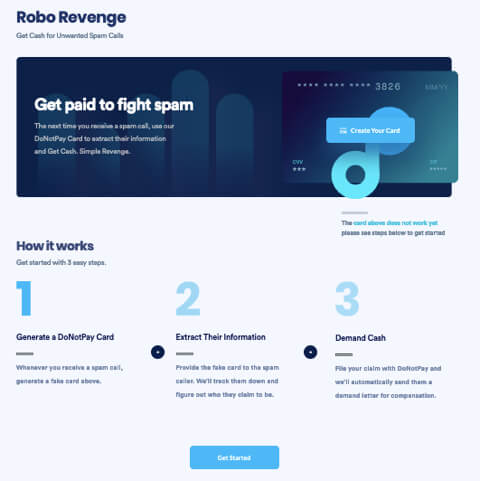 The next time you receive a spam call, use our DoNotPay Card to extract their information and Get Cash. Simple Revenge.

How it works
Get started with 3 easy steps.

1. Generate a DoNotPay Card
Whenever you receive a spam call, generate a fake card above.

2. Extract Their Information
Provide the fake card to the spam caller. WeXll track them down and figure out who they claim to be.

3. Demand Cash
File your claim with DoNotPay and weXll automatically send them a demand letter for compensation.

(Note: The above was taken from the very well-hidden Robo Revenge homepage.)

Once you click on ‘Get Started’, you will be taken to the portal to exact revenge on your robocaller. 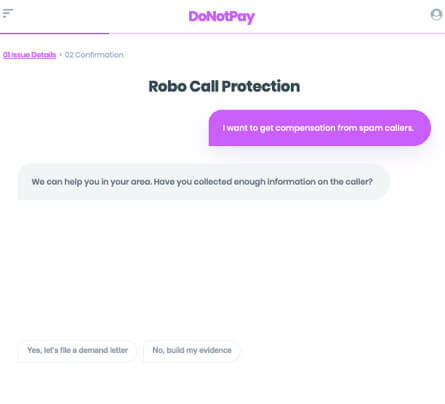 The interactive dialogue will walk you through a series of questions. 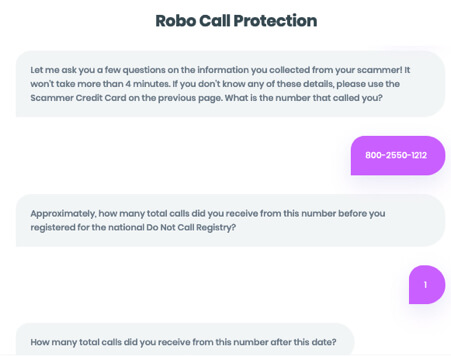 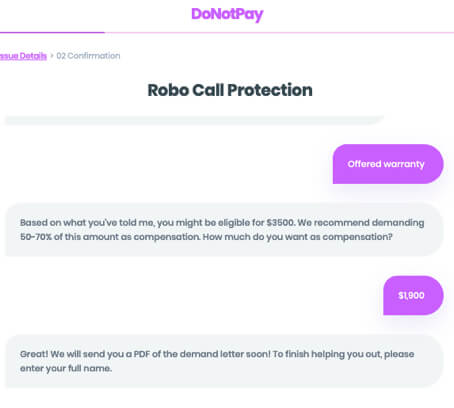 Now, here is where it gets interesting. We got into the Robo Revenge portal by going directly to the link – we did not actually create a DoNotPay account, let alone give them a credit or debit card. The system created an account from the info we gave them during the dialogue.

So, all in all, we really can’t recommend DoNotPay’s Robo Revenge, even though it seems to be legitimate to the extent that it will prepare a demand letter for you to send to your robocaller.

However, we can recommend another great resource, which will also get you there, and which has great reviews (because it’s straight-forward, 100% legit, and you don’t have to give up your credit card other than for a one-time purchase, and then you can use it forever). You can read about it at our article, How to Shake Down Robocallers and Robotexters for Fun and Profit.

New "NOTIFICATION - Storage Full" Phishing Spam - Don't Be Fooled!
5 Great Apps to Get You Organized
Don't Fall for the EZ Pass Spam
Paypal.me an Open Invitation for Scammers
FCC Publishing Weekly List of Telemarketer and Robocall Numbers
New Malware Spam Thanks You for Purchasing and Shopping with Them
Dance of the Pope Virus Warnings are a Hoax and Not True
How to Deal with and Report Spam or a Spammer
18shares 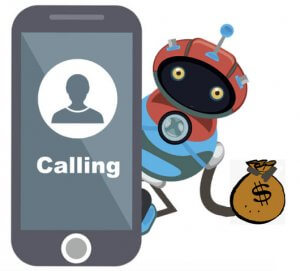 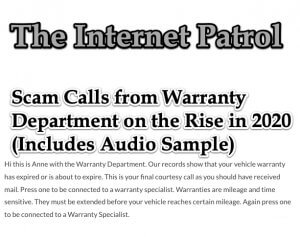