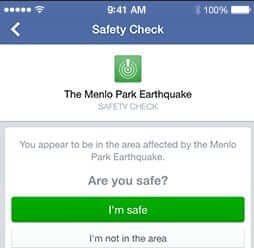 There are a million worries surrounding Facebook, ranging from its privacy policies to its stock price, but every so often the social media leviathan introduces a new feature that is (probably) unambiguously good. It’s called “Safety Check,” or more expansively “Facebook Safety Check,” and it allows users to report their status if they are located in a disaster zone. It could potentially go a long way in providing crucial information to account holders who have loved one’s in an area of upheaval – social, natural, or otherwise. Here is how Facebook Safety Check works.

If you are in or around a disaster area (and of course Facebook knows this), you will automatically receive a notification. If you are using the mobile version of Facebook, you will receive this alert immediately (provided your phone is with you and connected to the internet), but the notification will also appear when you log onto Facebook using a normal computer. You’ll receive a message that says something like this – “You appear to be in an area affected by [some disaster]” – and then you can click a button that says “I’m safe” or “I’m not in the area.” (There is no way to report any bad news through the new feature, although we suppose you probably shouldn’t be on Facebook if you are in imminent danger.) If you click either button, an update will be listed on your news feed and logged in a database that can be searched by friends and family.

The virtues of Facebook Safety Check are obvious: it offers an extremely simple, fast, and effective way to report your status if you are potentially caught up in a crisis. At one point or another, it’s fairly likely you’ve known someone in a disaster area, and Facebook is one of the first places you might check for pertinent information. It also encourages users to share information that they might not otherwise share – even if you lived in Boulder during the 2013 Floods, for instance, your first impulse might not be to go on Facebook and report that you are safe. Indeed, during the first part of the mayhem, you might not have even been aware of the severity of the flood, and thus Facebook Safety Check could alert you to the danger, another benefit of the new feature.

There are, however, limitations to Facebook Safety Check. Most obviously, not everyone has a Facebook account, so the database Facebook compiles will be incomplete. This isn’t necessarily a problem, as whatever information Facebook puts together could only ever supplement official reports from authorities, but it is important not to overstate the potential of the new feature.

Second, even if you have a Facebook account, there is of course no guarantee that you’ll report your status through Safety Check. Perhaps you don’t get the notification until the threat has passed, or maybe you can’t be bothered to click a button. This is arguably the biggest issue with the feature: it could cause false panic about a person who is ok, but hasn’t alerted the Facebook community to reflect this. The feature is almost designed to encourage anxiety, as in addition to asking if you are safe or geographically unaffected by the disaster, it lists friends who are in the area and reports if they have marked themselves as safe. The “not yet marked as safe” list could obviously cause concern, concern that in the pre-Safety Check era might not have existed.

Finally, large-scale disasters frequently disrupt internet service and mobile networks, preventing people from using the feature. This obviously isn’t a shortcoming of Facebook, and in fact the company might be part of the solution thanks to Facebook drones that are being developed to provide Internet from above. A drone supplying WiFi from the tropopause will be immune from most disasters, providing Internet regardless of the chaos that transpires miles below it.

It’s not often that Facebook introduces a feature for the simple sake of pure social good, and maybe it isn’t entirely pure – people may find ways to criticize it, and perhaps not without reason. However, Facebook Safety Check could certainly be a force for good, as no commodity is more valuable than information about loved ones when Rome is burning.

Facebook Privacy Disclaimer Not Worth the Paper It's Written On
Facebook's New Dating App and Service: Everything You Need to Know Right Now
Facebook is Analyzing All of Your Images and Taking Note of the Contents
Facebook Spanks Promotional Posts - Unless You Pay
Google Photos Will No Longer Back Up Images From Messaging Apps by Default
U.S. Government in Talks with Google, Facebook, to Track Location of Where Individuals with Coronavi...
Warning: Do NOT Use Facebook Face App! FaceApp's Russian Owners Own Your Data and What You Do in Fa...
New Facebook "Year in Review" Explained
Share the knowledge