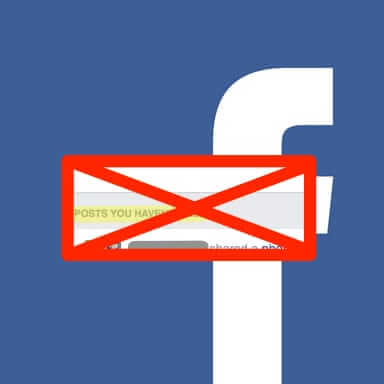 More people are seeing Facebook showing them ‘posts you haven’t seen’ on their friends’ timelines, instead of all of the posts – and they don’t like it one little bit. Once your account has been marked as having ‘seen’ something your friend posts (even if you just saw it in passing on your Facebook home page), if you go to their profile to find that post again, it has vanished, as Facebook shows you their ‘posts you haven’t seen’. Fortunately getting those missing posts back and seeing all of your friends’ posts again is easy – here’s how.

It was several years ago that Facebook announced something called ‘Story Bumping‘, where they decided which posts to show you in your newsfeed instead of it being chronological, but now they have brought something similar to individual timelines.

We have yet to run into anybody who likes the posts you haven’t seen ‘feature’. (It’s not surprising that there are articles out there with titles like how to turn off everything that you hate about Facebook.)

Unfortunately, there is no way to actually stop Facebook from hiding posts it believes you’ve already read, so no longer need to see. And as this Facebook community page makes clear, Facebook doesn’t care that people hate it, and want a way to turn it off – Facebook simply shut down comments to the page where people were asking about how to disable it, without even bothering to respond!


But there is a way to get back those posts that you’ve already seen, so that you can see all of your friends’ posts on their timeline, instead of just the ones you haven’t seen yet.

Go to your friend’s timeline.

That’s all there is too it – just reload the page, and it will display all of the posts.

Burgler Uses Victim's Computer While in Home: You Won't Believe What He Did Next!
Here's How to Find and View Google Cached Pages Results in 2022
Yes, Facebook IS Down - and So is Instagram - Happy Thanksgiving!
How to Snooze Reminder Alert Notifications and Find the View Button in iOS 10
How to Read Email Headers to Report Spam
How to Create and Use a Single Sign In with BBPress and WordPress
How to Disable the Notification Center Notifications Panel on Your Mac or Macbook
How to Stop Videos from Autoplaying on Facebook and other Websites
Share the knowledge

Number of people who have enjoyed this article: 6,353