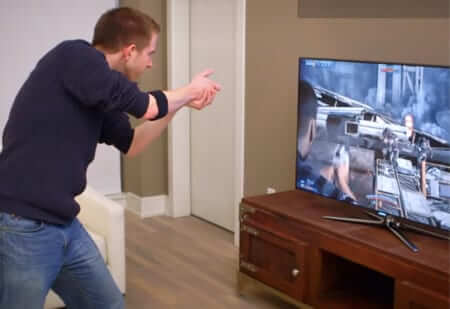 It’s sort of like a Wii controller for your life, that you wear on your arm.

Imagine a bracelet-like armband device that you wear on your arm, that lets you control your Mac or PC, iPhone iOS or Android phone, with a mere flick of your arm. Actually you don’t have to imagine it, because it’s here, and it’s called Myo.

It’s sort of like a Wii controller for your life, that you wear on your arm. Use gestures to flip through pages on a screen, to turn the volume up or down when playing music, or to shoot – reload – shoot in a game. And more. In fact, the possibilities are endless, especially as there is a Myo Developer Kit as well.

Myo is produced by Thalmic Labs, and according to the Myo site, “The Myo armband works with Windows, Mac, iOS, and Android. It connects to these compatible technologies via a Bluetooth 4.0 Low Energy connection. A more specific list of applications and programs that are compatible with the Myo armband will become available over the upcoming months.”

Said CEO Stephen Lake, in an interview with Business Insider, “It was clear that our hands and fingers were the key, as voice commands, eye tracking, etc. don’t work well in broad applications, so we wanted a way to plug our hands into the digital world.”


Myo is available for pre-order now from the Myo website. And here is a video of it in action.

Apple Pay Later Coming in iOS 16: Buy Over Time, No Interest!
How to Easily Draw and Write on Pictures You are Sending in Email with Your Mac
Yahoo and AOL DMARC Reject Policy Leads to Disabling of Microsoft Email Addresses on Mailing Lists
Google, Microsoft, Yahoo and Facebook Fight Back to Thwart NSA
The NSA is Telling Mobile Users to Turn Off Find My Phone, WiFi, and Bluetooth. Here's Why
How to Block Someone on Your iPhone and Do They Know When You Block Them?
Scholastic Offering Free Online Classes to Keep Kids Learning During the Coronavirus Pandemic
Urgent Microsoft Vulnerability Update Patch for All Versions of Windows
Share the knowledge

Number of people who have enjoyed this article: 2,303