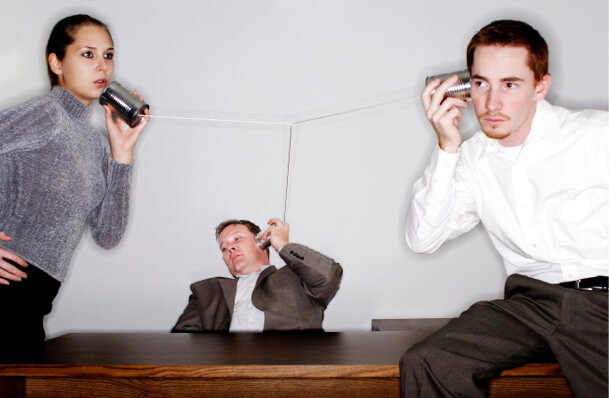 Now, to be clear, they say that they don’t keep them very long – just long enough so that if there is an issue that comes up during the room they can review it, or if law enforcement needs to be called.

But as Clubhouse makes very clear in their Clubhouse Privacy Policy, they are recording everything, all the time. In fact, their privacy policy mentions the word “record” no fewer than 12 times. Here’s what they have to say:

To create a safe environment on the App, we may record conversations and use the recordings to investigate violations of our Community Guidelines or Terms of Service. We generally prohibit the recording of conversations in our rooms without speakers’ and participants’ explicit authorization.

Conversations that moderators and speakers have in Clubhouse rooms. We temporarily record the audio in a room while the room is live. These conversations are deleted unless a user reports a Trust and Safety violation while the room is active. In those cases, we encrypt and retain the audio for the purposes of investigating the incident, and then delete it when the investigation is complete. We only record what can be heard in a room; we never record audio data from (i) muted speakers/moderators and (ii) listeners/audience members.

And yet, it is a violation of the Clubhouse Terms of Service (you have read them, right?) for you to “record any portion of a conversation without the expressed consent of all of the speakers involved”. (And that said, you should always assume that someone else in the room may be recording the conversation, so don’t say anything on Clubhouse that you wouldn’t say publicly, which, in fact, you are.)

And the Clubhouse Community Guidelines (you read those too, right?) also state that “You may not transcribe, record, or otherwise reproduce and/or share information obtained in Clubhouse without prior permission.”

Of course, it can’t really be said that Clubhouse hasn’t obtained your own prior permission, because you agreed to the Terms of Service when you sign up. Even if you didn’t actually read them.

It is interesting to note the following, from Clubhouse’s Community Guidelines, in which Clubhouse says that you can report an incident in two ways, and that a recording can only be reviewed if you report the incident from within the room in which it is happening. That does suggest that they don’t keep the recording for very long afterwards (although it could be for a number of other reasons, as well). Specifically Clubhouse’s Community Guidelines say that “Submitting a report from inside the room prompts us to retain the temporary, encrypted audio recording for the purpose of investigating the incident”, while that “when you report an incident directly from a user’s profile, we will not have access to any room’s audio to support the investigation.”

Now, all that said, the pitfalls of speaking publicly in an app that you now know records you are really no different than any other social media app, it’s just a different format. People can screenshot Facebook and Instagram, screen record TikTok and, yes, audio record Clubhouse.

The bottom line is, again, don’t say anything in or on any Internet platform that you aren’t prepared to have preserved for posterity – and future litigation.

How to Look Good in Video Calling Apps
Google's Huge Sensorvault Location Database Provides Law Enforcement with Lists of Devices Near Crim...
Meta Facebook Says They Will Remove Facial Recognition Following Outcries and Concerns
Russian Facial Recognition App Raising Privacy Concerns Around the World
Apple Google Contact Tracing a Reality with Release of Coronavirus Tracking App Interface
The Best Must-Have Apps for 2013
New Bluetooth Internet Toothbrush
Hate Yoast? Us Too - So Here is the Alternative that We are Using
Share the knowledge