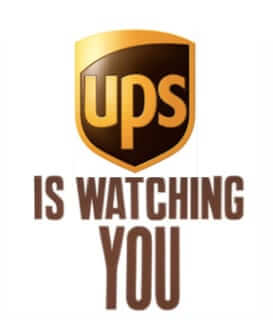 UPS trucks are equipped with a dizzying array of technology – including 200 telematics sensors – that UPS is using to spy on drivers. According to UPS, the driver surveillance is used to optimize delivery and the company’s bottom line. From knowing when a driver buckles their seatbelt, to every time the driver opens and closes the door (using a remote keyfob because using a key takes too long), to the exact moment each time the driver starts or stops the engine, to how often and for how long a driver backs up, UPS is monitoring every little detail of their drivers’ day.

Explains Jack Levis, Director of Process Management at UPS, in an interview with NPR, “The data are about as important as the package for us. Just one minute per driver per day over the course of a year adds up to $14.5 million.”

According to UPS, this attention to detail is what, at least in part, accounts for the high salaries that UPS drivers can earn.


But according to drivers, and the union, there is a another side to all of this surveillance.

Explains the union activist website LaborNotes.org, “Every second of a driver’s day is monitored, through GPS, the touch-screens where customers sign for packages, and “telematics” — 200 sensors mounted on each truck (in UPS lingo, a “package car”).”

While under the current union contract, drivers cannot be disciplined based on the telematics and other data alone, there have been reports of drivers’ numbers being posted publicly, and of UPS managers going over a driver’s data minute by minute.

And, according to LaborNotes, UPS is getting ready to upgrade the system, to what the union is referring to as “telematics on steroids”, or the ORION system, which will, among other things, actually dictate throughout the day how the driver should rearrange their route to further optimize delivery and, presumably, expenses.

So, the next time you see your friendly neighborhood UPS driver, give them a wave and a smile. It may be the only friendly human interaction they have all day.

How and Why Should the Average Person Use Protonmail?
Your Roomba May be Mapping Your Home and Sharing Your Home Map
How Uber is Taking Your Privacy for a Ride
Facebook Defends Their Facial Recognition Technology to the Senate Judiciary Committee's Subcommitte...
Does Microsoft Windows 10 Technical Preview Really Include a Key-Logger? Yes
Project Optic Nerve: British Spooks Looking at Your Yahoo Webcam Chats Surprised to Find So Much T a...
UK Report: Mass Interception of Citizen Data Vital to Security
Never Heard of People Data Labs? They've Heard of You, Likely Have Your Data and It Was Exposed in a...
Share the knowledge

Number of people who have enjoyed this article: 2,179