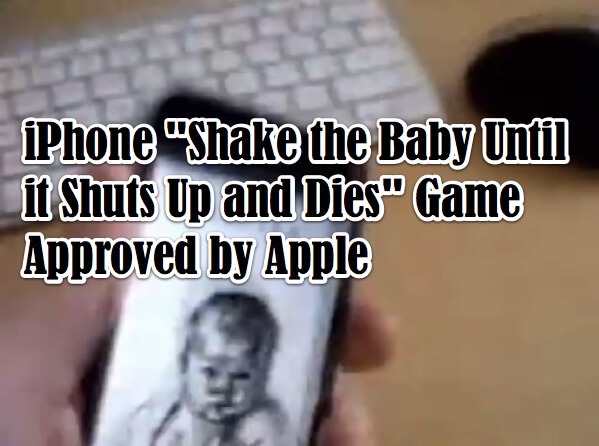 If you believe that Apple really manually reviews and approves (or disapproves) every iPhone application before it can be sold through iTunes, then you have to believe that Apple inexplicably approved an application that simulates a crying baby which can only be quieted by shaking it to death (demonstrated by the cessation of the crying, and red Xs over its eyes).

[Note: Following the massive outcry over this game, Apple quietly pulled the app.]

According to the Baby Shaker application’s description, “On a plane, on the bus, in a theater. Babies are everywhere you don’t want them to be! They’re always distracting you from preparing for that big presentation at work with their incessant crying. Before Baby Shaker there was nothing you could do about it. Now, Baby Shaker gives you a charming drawing of a baby sure to make those with a less than iron will fawn. True to life, it begins to annoy you immediately. See how long you can endure his or her adorable cries before you just have to find a way to quiet the baby down!” 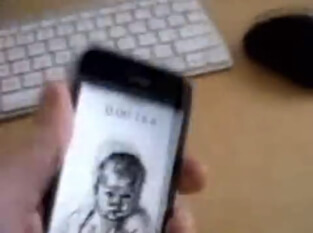 [You can see a YouTube video of this disturbing app here.]

The application first appeared earlier this week, was taken down, and then reappeared the next day. As of the time of writing, the application is again not available – but for how long?

Said Jetta Bernier, executive director of the anti-shaken baby syndrome organization Massachusetts Citizens for Children, “I am disheartened that with this new application Apple is encouraging frustrated adults to shake infants, not only to end their crying, but to end their lives. There are many effective infant soothing strategies that adults can use to calm their fussy, crying babies. Shaking is not one of them.”

Apparently not everybody feels this way, however. In addition to the developer of Baby Shaker, Sikalosoft, at least one user posted a review in iTunes saying that the application didn’t go far enough, and complaining that it was “Kinda weak there should be a choking sound or something more dramatic.”

Still, outrage by far outweighs the yay-sayers. According to Marilyn Barr, who is not only the founder of the National Center on Shaken Baby Syndrome and a board member of the Sarah Jane Brain Foundation, but, apparently, an Apple expert as well, “Apple notoriously and routinely rejects new apps from developers with a ‘rigorous’ vetting process, nonetheless apparently allowed this horrible application to be sold through its store. Not only are they making fun of Shaken Baby Syndrome but they are actually encouraging it. This is absolutely terrible.”

How to Make Your Mac Stop Using Your iPhone Keyboard Shortcuts
Is the Apple Watch Compatible with an Android Phone?
How to Find Those Big Files Taking Up Space on Your Mac Hard Drive
Full Explanation of Court Order to Apple to Unlock San Bernardino Shooters' iPhone and Apple Refusal...
Is Plugin-Conta Eating Up Your Memory? Here's What It Is and What to Do About It
How to Block Someone on Your iPhone and Do They Know When You Block Them?
iPhone WiFi or Bluetooth Automatically Turns Back On? Here's Why and What to Do About It
Apple: It Seems Disagreeing with DOJ Means You Must be Evil and anti-American
Share the knowledge

Number of people who have enjoyed this article: 6,009