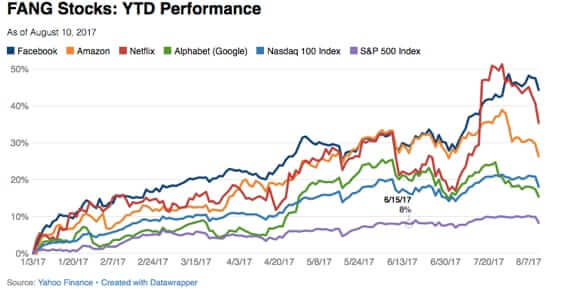 In recent months you may have heard the term “FANG stocks” to refer to a particular group of stocks. More specifically, a particular group of high tech, high performing stocks. Those stocks are Facebook, Amazon, Netflix, and Google (hence F-A-N-G). Of course, the parent company for Google is now Alphabet, so these really should be called FANA stocks.

…which really should now be called:

Of course, these stocks, whatever you call them, all have something in common. First, they are all well-known high tech companies. Second, they are stocks (and companies) which continue to grow at a strong rate of growth. Although, one must ask whether a stock continues to grow simply because it grows (in other words people continue to invest in the stock simply because they see its growth, which in turn perpetuates more growth) or because the company actually has something of continued value to offer other than the fact of its growth.

According to Investopedia, “Each of the FANG stocks are big cap stocks that focus on technology and internet services. They are also considered growth stocks due to the continued emergence of technological devices like cloud storage devices, big data, social media, and e-commerce tools. Financial reporting from the quarterly 13-F filing which is required of all investment managers with over $100 million in assets, revealed that most prominent hedge fund managers have FANGs in their portfolios. The stocks were included as growth and momentum stocks by reputable funds like Berkshire, Soros, Renaissance, and Citadel in the first quarter of 2017.”

As we mentioned above, technically the FANG stocks should actually be called FANA, with Google’s creating parent umbrella company Alphabet, which happened in 2015.

The term ‘FANG stock’ was originally coined by Jim Cramer, founder of investment info website TheStreet. Even Cramer himself has acknowledged the need for the change, and not just from FANG to FANA. In fact, in 2016 Cramer suggested a move from FANG stocks to FAAA stocks:

However, Googlebet’s NASDAQ stock symbol is still ‘GOOGL’, so you can be forgiven for still thinking of Alphable as Google.

And not everyone includes Alibaba in the mix.

In fact, just a few weeks ago, CNBC reported that “The ‘FAANG’ stocks – Facebook, Apple, Amazon, Netflix and Google parent Alphabet” had hit a new high for 2018.

Number of people who have enjoyed this article: 625