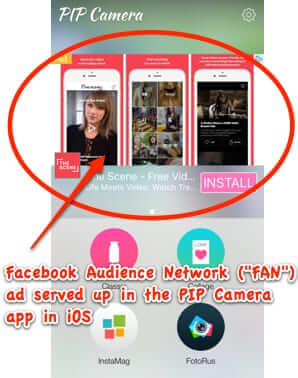 If you have noticed that ads from Facebook (not for Facebook, from Facebook) are now showing up in apps on your phone or tablet, you’re not alone. Facebook announced the ‘Audience Network’ (FAN) in 2014, which is a way for advertisers on Facebook to extend their reach (and their ads) into non-Facebook apps, and it seems that more and more app-makers are serving up these ads in their apps in order to generate advertising revenue.

(Remember, if you are not paying to use the product, than you are the product. And given the recent court ruling that if you are using a service for free, you are not a ‘customer’ and so are not entitled to the same privacy protections as paying customers, it’s never been more important to remember that.)

Ads Served through Facebook in the PIP Camera App

Facebook ads work because they’re personal, relevant and easy to measure on both desktop and mobile. The Audience Network brings these same powerful features to additional app-based mobile experiences, giving marketers even more scale for their Facebook campaigns.

The Audience Network uses the same targeting available for Facebook ads today, including Custom Audiences, core audiences and lookalike audiences. It features the same measurement tools marketers use for their Facebook ads, too.

When an advertiser creates a campaign on Facebook, they have the option to have their ads pushed to apps that are signed up to display FAN advertising. 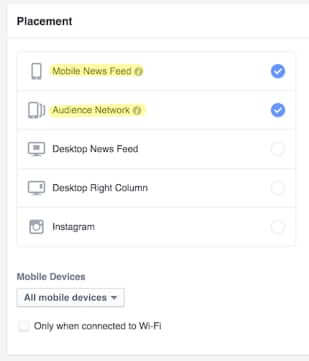 So, what can you do about this if you are on the receiving end of these ads, in your apps, and don’t want to be milked as part of the Facebook cash cow machine?

It turns out that you do have some control over whether the ads you see in apps will be informed by Facebook, but of course cutting Facebook (somewhat) out of the mix will not change that the app is displaying ads. It will only remove the Facebook piece. Don’t get us wrong, removing the Facebook piece is not a bad first step – but if you want to get rid of the advertising altogether, you usually need to ‘upgrade’ to the paid version of such an app, and some apps have no paid version, all of their revenue is derived from advertising and in-app purchases.

Can your Facebook ad preferences be used to show you ads on apps and websites off of the Facebook Companies?

The Facebook Audience Network is a way for advertisers to display ads on apps and websites. When companies buy ads through Facebook, they can choose to have their ads distributed in the Audience Network. We want to show ads that are relevant and useful to you. Your Facebook ad preferences can help us understand which ads would be most interesting to you. You can choose whether your Facebook ad preferences are used to show you ads on apps and websites that aren’t provided by Facebook.

If you allow your Facebook ad preferences to be used:

You’ll see ads that are more interesting and relevant to you.

If you don’t allow your Facebook ad preferences to be used:

You’ll still see ads, but they won’t be as relevant to you.
You may still see ads for other reasons, such as:
Your age, gender or location.
The content in the app or website you’re using.
Your activity off of the Facebook Companies.

Let’s not go into the rather disturbing implications of those last few lines, for now, and focus on how to turn off having the FAN use your information for advertising preferences.

1. Go to your Facebook settings menu, and select ‘Settings’. 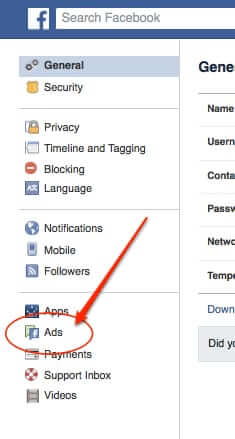 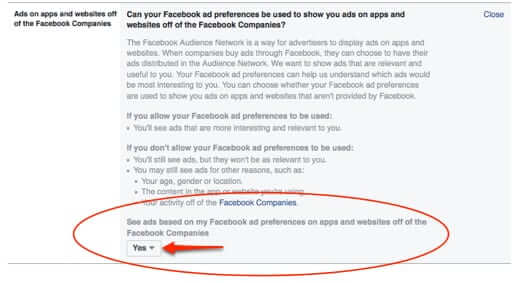 Now, again, this is not going to stop the ads in apps that use the Facebook Audience Network, because they will just substitute other ads, but it will stop them from being targeted through Facebook. 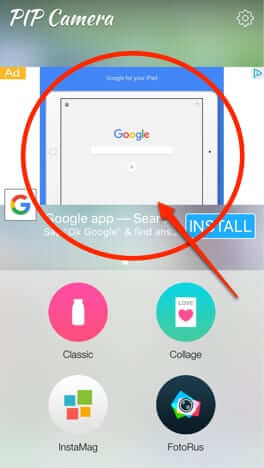 Paternity Notice on Facebook not Enough for Termination of Parental Rights, Rules Court
How to Turn Off Facebook Event Reminder Notifications
Cool Photo Editing Apps That Makes Your Phone Pictures Standout
What Does #hmu4atbh Mean? We Explain
Facebook Bug Causing Legitimate Posts to be Marked as Spam
Facebook's New Dating App and Service: Everything You Need to Know Right Now
Internet Deception: Why It's So Easy and How to Detect It
Facebook Monitors Self-Censorship When You Type and Don't Hit Send
Share the knowledge

Number of people who have enjoyed this article: 3,212