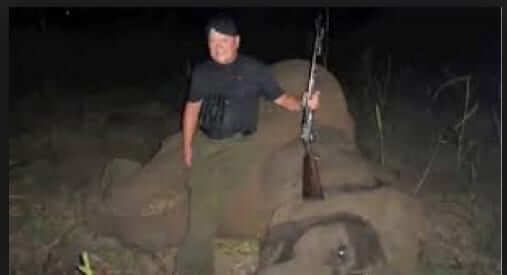 Usually it’s the feminists who are outraged by the actions of GoDaddy CEO Bob Parsons, but this time he’s raised the ire of the animal rights activists, including (but by no means limited to) PETA (which stands for People for the Ethical Treatment of Animals). It’s not hard to understand – in this day and age people are more likely than not to be upset by the killing of an elephant, let alone by the braggadocio posting of a video of the deed. And despite the timing, the GoDaddy elephant video is no April Fool’s joke – it’s all too real.

It seems that Parsons goes big game hunting in Africa every year and, in fact, has posted videos of his kill every year. But it was his actions this year – the direct shooting of a single elephant, and posting a video of the entire thing (a video which PETA has dubbed an “elephant snuff film”) that has finally done him in.

PETA, who themselves were a GoDaddy customer until the video came to their attention, has called for a boycott, and great numbers of GoDaddy customers, some quite high profile, are leaving GoDaddy over not only the deed, but Parsons’ unapologetic defense of his actions.


Says Parsons, “The blowback – you’ve got to look at who it’s coming from: a small but very, very vocal group that moves in unison, inspired by PETA. Very few of them are our customers.”

But here at the Internt Patrol we are seeing a lot of our colleagues and peers who are GoDaddy customers, and who are shopping for a new registrar as we type this.

In a statement, PETA also awarded Parsons with a brand new award created just for Parsons – The “Scummiest CEO of the Year Award”.

Parson’s primary defense is that the elephant was destroying the crops of a hungry people. In fact, at the end of the video people can be seen ripping hunks of flesh off the elephant, to eat. “I think that most people when they see this video will understand what’s happening. These people are on the brink of starvation; they need their crops and need to eat. Elephants are not endangered and probably there are too many of them,” said Parsons.

Parsons is not only unrepentant, but believes that his actions will actuall boost sales at GoDaddy.

“I expect sales will go up,” said Parsons. “The reason is that first of all, the average American is a very good individual who understands that people need to eat. They know there is a circle of life and they don’t much care for political correctness. When they see this, people who are not familiar with GoDaddy will check us out. It’ll be a good thing.” He added that he has given up hunting leopards as that takes more time, taking time away from hunting elephants.

Parsons may be right – and maybe this will blow over, or even boost sales. But we are inclined to think not.

In the end, though, it’s not likely to matter all that much to Parsons anyways, who has not only made his position clear, but who it seems answers to nobody, and so can’t be asked to step down. While GoDaddy considered going public in 2006, they didn’t, and it would appear that at this time there is not even a board of directors, or other higher authority – the buck stops with Parsons.

We won’t link to the video here, but if you want to see it, just Google “Godaddy elephant video”

Want to let the executives at GoDaddy know what you think? You can contact them via Twitter here:

40% of Households Eligible for Low-Cost Internet or Free Internet with the Affordable Connectivity P...
Entire Areas of the Internet Knocked Offline by Enom Following "Routine Maintenance"
No, the SpiderMan 3 Trailer Did NOT Break the Web or the Internet
Why the U.S. is Concerned about Russian Submarine Activity near Undersea Internet Cables
How Will the Comcast Time Warner Merger Affect Me?
The Spinning Disks of Internet Slowdown Day Explained
What's the Big Deal about the Starry Internet Device? Not Much. At Least Not Yet.
How to Turn Off or Cancel Auto Renewal of Domains at GoDaddy
Share the knowledge

Number of people who have enjoyed this article: 5,270