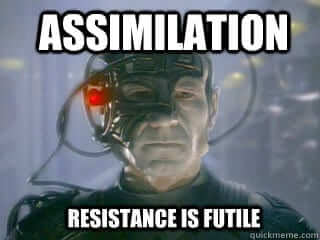 The Borg are the dreaded, unstoppable enemy that was introduced to us first in Star Trek: The Next Generation.  And of course many are familiar with Jeri Ryan’s Borg character, Seven of Nine as she appeared in Star Trek Voyager.  The concept of the Borg, what made them so scary, was that they were basically all consuming and couldn’t be stopped.  They took new technology and assimilated it into their “collective.”  And what was considered inferior was discarded or otherwise ignored. 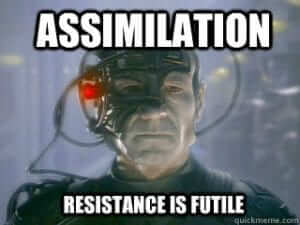 Back in the 90’s a popular joke was “We are Microsoft, you will be assimilated.”  At the time it felt very true and some were even scared that Microsoft’s monopoly would harm innovation.  Even recently it still felt like Microsoft was playing a bit of the Borg role until it backed off of plans to require internet connection for Xbox One games.

Well, now we have a new potential Borg and it may very well consume us all.  Comcast has just announced plans to acquire Time Warner Cable for the princely sum of $45 billion.  Three years earlier, Comcast purchased 51% of NBC for $13.8 billion.  (It has since bought 100% of the company.)  This would make Comcast a gigantically hugely massive company.  (That’s a technical term for those who aren’t familiar with it.)

What this Comcast Time Warner merger does is not only create a very large media company; it actually merges the largest cable company with the second largest.  After divesting around 3 million subscribers in an attempt to appease regulators who will closely scrutinize this deal, the new Comcast Time Warner merger company is expected to have 30 million subscribers.  By comparison, the third largest cable company, Cox Communications, has 2.9 million cable subscribers and another 3.2 million internet subscribers.

While Comcast expects this merger to take effect by the end of the year, that may be wishful thinking.  The previous merger with NBC took 13 months for government approval.  The deal between Comcast and Time Warner is even larger financially (three times as large.)  Likewise, regulators may very well believe that the new company would essentially be a monopoly if the next largest cable competitor is a fraction of its size.

There are already legitimate concerns over whether this merger will lead to higher cable prices.  Of course cable prices rise on their own without the help of an anti-competitive monopoly, so this is fair to wonder about.  Undoubtedly the two companies will do their best to alleviate concerns about rising prices.  In the end, there’s no way to know until it happens.

Of course this might end up going the way of the failed AT&T and T-Mobile merger.  Regulators may decide that this company would simply be too big and would harm competition and thus consumers.  But if that doesn’t happen, then move over Microsoft, there is a new tech giant to take your place.  They are Comcast Time Warner and everyone will be assimilated.

How to Turn Off or Cancel Auto Renewal of Domains at GoDaddy
Plot Thickens as FIFTH Undersea Internet Cable Outage Reported and Iran Taken Offline
Massive Transcontinental Internet Outage as Three Undersea Cables Severed - Again.
As More Undersea Cables are Gashed - Disrupting Internet Access to Middle East, India, Sri Lanka and...
Is The Internet Changing Our Brains?
Is Your ISP Interfering with Your Downloading and Bandwith Use? Ask Switzerland and the EFF
Verizon Acquires Yahoo and Apparently It's Worth It - Here's Why
The Best Free Online PDF to Text Converter