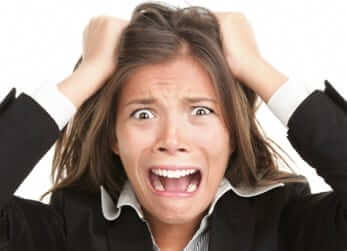 This is particularly an issue for sites that use Aweber or other RSS-based newsletter services to create their newsletters, and so figuring out how to get rid of it may be of prime importance to some sites. You may already have looked in every WordPress file – and even every theme file – on your site, and couldn’t find where it was coming from, anywhere.

It’s being generated by a plug-in.

The Yoast SEO plug-in, to be specific.

So, go into your WordPress plugins, and go to the Yoast SEO settings: 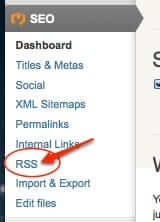 Click on the RSS settings, which shows you this: 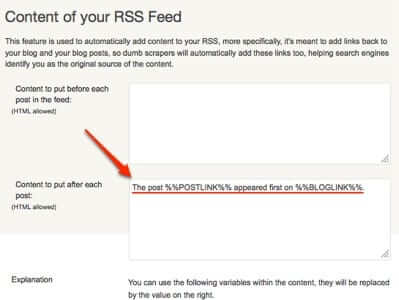 See that line? It says:

This is the culprit.

Now, let’s understand why you would want to have this line in your RSS feed.

It is not unheard of (in fact, it’s not even uncommon) for unscrupulous sites to scrape the RSS feeds of others, and then republish the content, letting you do all the work, while they reap the benefits of your work. The sort of sites and people who would do that will rarely check to see what is actually showing up on those sites, via the purloined RSS feeds. So having that line in there is a way of letting visitors to those sites know who wrote the original content, and that the content was, at best, copied, and at worst stolen.

But, as we mentioned above, if you are using your RSS feed to republish your own content in another format or forum, having that line showing up with every post can be problematic.

Now you don’t have to have it there. Simply delete the line from the Yoast SEO RSS settings, and save, and it will be gone.

Many, many thanks to Barbara Feldman, over at SurfnetKids for pointing us in the right direction for this fix!

People also searched for ld feeds appear not in comments admin, this post first appeared on

How to Cancel a Recurring Amazon Order
How to Turn Off App and Game Invitations on Facebook and Stop Facebook from Sharing Your Info
The Perfect Earbud Holder to Wrap, Store and Keep Your Earbuds from Getting Tangled!
How to Sign and Send PDF Documents on an Android Device
How to Check and Cancel Your Paypal Automatic Recurring Payments
5 Practical Microsoft Apps You Should Have On Your Android or iOS Device
How to Recover and Restore iTunes Music Purchases
How to Add a Mac Contact Picture without Photo Stream or Faces 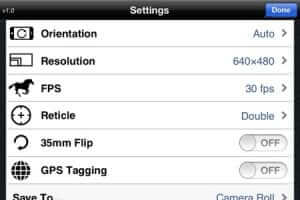 How to Make Videos Taken on Your iPhone Smaller

How to Get the Chumby App for Android to Work