Do you know the name John McAfee? Well, if you have a PC with McAfee virus protection, then you just might. John McAfee is a computer programmer and the founder of the McAfee security software that just about anyone with a PC has already installed on their computers. McAfee is one of the first people ever to develop both an anti-virus software, and a virus scanner. 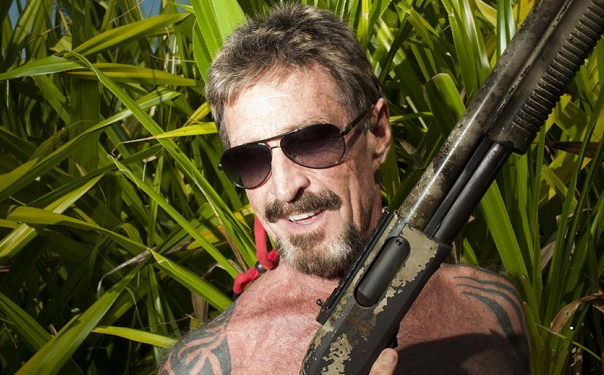 McAfee sold off the company, resigning in 1994, and had a networth of $100 million at the peak of his wealth. Unfortunately by late 2009, reports emerged that McAfee’s fortune had dwindled to $4 million due to economic downturn.

McAfee retired to a little bungalow in Belize where things have taken a rather startling and dramatic turn of events. McAfee has become entangled in a story of murder, drugs, and being on the run from the Belize government. And it seems that the landscape of murder, wealth and intrigue has changed these days with the use of the Internet. McAfee has virtually chronicled his life on the run through his personal contacts at Wired.com, and is even hitting up chat rooms for advice on how to better make himself untraceable by the Belize government.

McAfee’s problems start in May of this year when his Belize bungalow was raided by the Gang Suppression Unit (GSU), where they allegedly found that he had 17-year-old Belizean girlfriend, unlicensed weapons, $20,000 in cash and unlicensed drug manufacturing paraphernalia. The drug manufacturing paraphernalia in question was said to be “bath salts,” the same drug of which the Miami canibal zombie who ate the face off a homeless man was accused of being under the influence. McAfee reportedly dreamed of reworking the drug to be more pure, and less harmful. The GSU also allegedly found a journal belonging to McAfee, which had entries claiming that he had a personal harem, with one of the women in the harem being an assassin. McAfee was released after the raid and not charged.

In the mean time, McAfee was having ongoing disputes with his neighbor, fellow American Gregory Faull. Among the biggest issues was that of McAfee’s dogs, 11 in total. Faull had issues with the fact that McAfee’s dogs were aggressive and noisy. On November 9th, four of the dogs were found poisoned, forcing McAfee to mercy kill them and bury them on his property. Within a few days, Faull was mysteriously found dead on his property, and McAfee was considered a person of interest.

And surprisingly, this is where things got weird.

Once the Belize police began hunting down McAfee, he started to reach out to his personal friend at Wired.com, Joshua Davis. In the days following the man-hunt by the Belizean government, McAfee has communicated several times with Davis to talk about his life on the run, his feeling that the government of Belize is made up of a bunch of pirates, and that Belizean prime minister Dean Barrow had a blatant disregard for the country’s constitution.

The timeline, as best as it can be ascertained based on exclusive interviews with Wired.com, appears to be that, following Faull’s murder Sunday morning, McAfee was wanted for questioning. When police arrived at McAfee’s property to question him in connection with the murder, McAfee reported that he buried himself in the sand and covered his head with a cardboard box so he could breathe. McAfee reports he stayed there for almost 20 hours before stealing away from the property.

In calling Davis of Wired.com to report what was happening, McAfee stated that he feared that the Belizean police would torture and/or kill him once they caught him, but he conceded, “Obviously, given enough time, they will track me down.”

McAfee went on to say that he has been on the run, sleeping on lice-infested mattresses, hiding in boats and cars, as well as undisclosed homes. He told Wired.com, “You know what happens in Central American jails in order to get information. I fully expect to have signed statements saying God knows what. If you put enough pain on someone, they will say or sign anything.” He went on to tell Wired.com, “I’m unable to move. All the police, all the media have my photo. It’s a small country. If I leave this house, I would be identified immediately and nabbed.”

And for those of you who love murder mysteries, it seems that the landscape of being on the run has changed these days, as compared to the days before the Internet was prevalent. McAfee is relying on his online cohorts every step of the way while on the run. He is allegedly calling Davis at Wired.com on an almost hourly basis, reporting that he is changing his appearance as a disguise saying, “I have modified my appearance in a radical fashion. I’ll probably look like a murderer, unfortunately.”

Further, along the way of his hiding out, McAfee has hit up some message boards wanting to learn about how phone tracking works. Allegedly under the alias of “stuffmonger,” McAfee posted

While some answered, others found it an odd request, with one poster saying, “Well this is awkward…”

Whether McAfee’s concerns are founded, or he has just dipped into his stash of bath salts too much, McAfee seems convinced that the police and Belize government are out to get him. He seems certain that Faull is only dead because the bullet that killed him was meant for McAfee, and that the police will plant evidence to incriminate him, including, “a cache of fully automatic weapons, four tons of cocaine. Maybe a Soviet submarine.” Yes, the Belizean government may plant a Soviet submarine.

And McAfee seems determined to compare his life to that of the Soviets, saying upon the capture of some of his associates by Belize authorities, “This is exactly what happened to Soviet dissidents when Stalin took power. If they could not catch the man himself, they rounded up all of his friends.”

And that was not the end of his bizarre musings to Wired.com. In an essay to Davis, McAfee wrote:

“The Latin source of the English word “Pirate” is “Pirata” – “one who exploits or plunders”. Belize, which was founded in the 16th Century by pirates and ignored by most of the world for 400 years, is a country of plunderers. The notorious buccaneer and one time governor of Tortuga – Peter Wallace – established Belize as a pirate haven when he moved here in 1638. It was a perfect haven. The barrier reef, which is the second longest in the world and has few navigable cuts, provided protection against the heavy Spanish Galleons which were prey for the pirates. Belize also lay adjacent to the main trade route used by the Spanish as they slowly sucked nearly forty million pounds of gold from South America and shipped it to Spain. So short forays frequently yielded great gains. The English turned a blind eye to Belize because, in England’s constant wars with the Spanish and the French, the Belizean pirates, by attacking the enemies of Britain, acted as an ally. The rest of the world simply didn’t care. Belize was too insignificant to think about.

Pirate attitudes were brutal and blunt. John Vickers described a Caribbean pirate by the name of Tom Barrow in a London deposition in 1716:

[They] commit great disorders in that Island, plundering the inhabitants, burning their houses, and ravishing their wives. One Thomas Barrow, formerly mate of a Jamaica brigantine which run away some time ago with a Spanish marquiss’s money and effects, is the chief of them and gives out that he only waits for a vessell to go out a pirating, that he is Governor of Providence and will make it a second Madagascar, and expects 500 or 600 men more from Jamaica sloops to join in the settling of Providence, and to make war on the French and Spaniards, but for the English, they don’t intend to meddle with them . . . .

This description could apply exactly to the current Prime Minister of Belize and much of his cabinet. Their Gang Suppression Unit plunders, burns and ravishes. They have run away with the country’s constitution – as a month ago trial by jury is no longer a right, and preventive detention can keep a person locked up without charges for up to three days. They wait only for Chavez to provide them with oil and funds and they will then kick ass. But they still need the rest of the world.

Belize is, today, still a pirate haven and is run more or less along the lines established centuries ago by the likes of Captain Morgan, Blackbeard and Captain Barrow: Plunder is the preferred means of wealth acquisition; Exploitation is the preferred formula for success; Brutality creates respect; Fear is the means of governance; Extortion is the method of collecting what is due. It’s a system that functions more or less smoothly if you play by the rules.

I am not fond of these rules however and I openly oppose them. This is the root of my struggle here in Belize.

Over the next few days, I will tell my side of the sad story unfolding around me and tragically affecting my closest friends, many of which have been arrested and are currently being detained under the draconic laws enacted by the current Prime Minister.

Consider Amy. She was the girlfriend of Arthur, the leader of the Taylor Street Gang in Belize City. Arthur attempted to turn himself in to the police. His hands were handcuffed behind his back and he was then shot multiple times. Amy came to my home unannounced and requested asylum from the GSU (Gang Suppression Unit) shortly after Arthur’s murder. I had never seen her before and knew nothing about Arthur other than what I had read in the press. I gave her asylum.

This fact alone would be sufficient answer to my critics that insist that if I were innocent I would simply turn myself in. The list of people who have died while in the custody of Belizean police, from suffocating on their own vomit, hanging themselves, overdosing on drugs, being beaten to death by fellow inmates, being shot while trying to escape, etc. would fill a phone book from an average American town. It is a convenient method of silencing those whom the government deems undesirable.”

As of this writing, McAfee is still on the lam, and still wanted for questioning in connection with the murder.

Russian Facial Recognition App Raising Privacy Concerns Around the World
Sony Releases The Interview Movie: Here's Where You Can Watch The Interview
Wondering what the Heck LGBTTIQQ2SA Stand For? Here's What it Means
Will SpaceX Internet Interfere with Astronomy?
Pakistan Accidentally Triggers YouTube Outage Around the World
5 Practical Microsoft Apps You Should Have On Your Android or iOS Device
Russian Official Tweets Racist Obama Tweet of Obamas and a Banana
NSA Co-Traveler Program Tracking Every Cell Phone Movement and Location