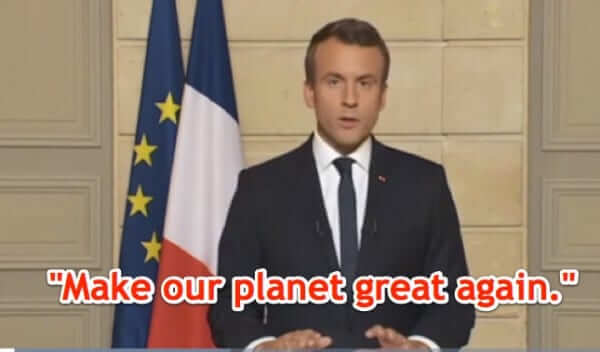 Oh Internet video, the bane of those Internet citizens who prefer to read text. If you, like many others, have been searching the world over (quite literally) for the full text of French president Emmanuel Macron’s speech following the United States’ withdrawal from the Paris Climate Agreement (more formally known as the Paris Climate Accord), we have it for you!

What is most unusual is that following Macron’s speech on the subject in French (he is the president of France after all), he gave a speech in English, clearly for Americans and other English speakers. It is in this English address that he uttered the potshot heard round the world: “Make our planet great again.”

Please note that by bringing you this text we are not espousing any one view on politics in general, or climate change in particular. We are simply providing people who would rather not have to watch the video, and who are searching for the text version, with the text of the speech.

Here is the full text of that speech delivered in English by President Macron:

It {climate change} is one of the major issues of our time. It is already changing our daily lives, but it is global. Everyone is impacted.

I just say it (to) President Trump in a few words, a few minutes ago, this assessment .

To all scientists, engineers, entrepreneurs, responsible citizens who were disappointed by the decision of the president of the United States, I want to say that they will find in France a second homeland. I call on them, come and work here with us to work together on concrete solutions for our climate, our environment. I can assure you France will not give up the fight.
I reaffirm clearly that the Paris agreement remains irreversable and will be implemented, not just by France, but by all the other nations.

Across the coming hours I will have the opportunity to speak with our main partners to define a common strategy and to launch new initiatives.

I already know that I can count on them.

I call you to remain confident.

Because we are fully committed.

Because wherever we live, whoever we are, we all share the same responsibility. Make our planet great again.

In a preceding speech in French, President Macron also told the American people tht “France believes in you, the world believes in you. Do not be deceived, on the climate there is no plan B because there is no planet B. So yes, we will continue,” adding that “Tonight the United States has turned its back on the world but France has not turned its back on the Americans.”

You can read excerpts of President Macron’s speech delivered in French here.

Number of people who have enjoyed this article: 1,522