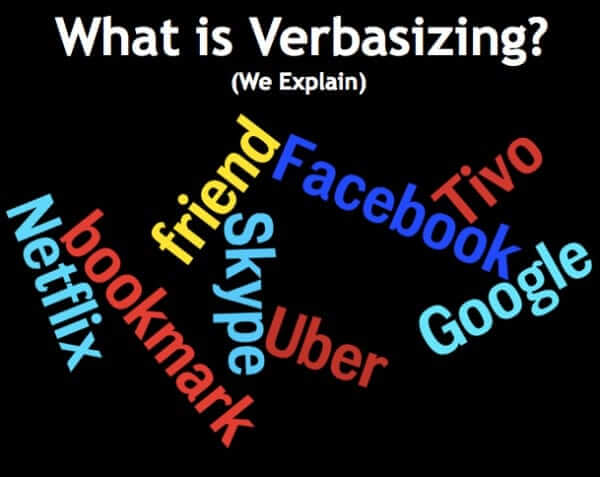 The Internet has sponsored a new self-referential verb: to ‘verbasize’ something. The much more official, and dare we even say accurate, term for changing a noun into a verb is ‘verbing’. You may also recognize the phenomena as something being ‘verbed’, or to ‘verbify’ something (that act being the verbification of a noun), but at least some part of the Internet is now calling it ‘verbasize’.

The act of using a noun as a verb; to verb a noun

Example: using the proper noun Google as a verb as in “Let’s Google the word verbasize.”

While the term may be new, the concept is not. In fact in this Oxford University Press article, John Hird observes that “This conversion of nouns to verbs is known as ‘verbing’ and it has been around for as long as the English language itself. Ancient verbs such as rain and thunder and more recent conversions such as access, chair, debut, highlight and impact were all originally used only as nouns before they became verbs.”

Curiously, something called the Verbasizer has been around for several years – 22 years in fact. The Verbasizer was a Mac application used by David Bowie to help him write lyrics, according to Motherboard.

Explains Motherboard’s Matthew Braga, “One of my favourite videos of David Bowie (I have a few) is a clip from the 1997 documentary Inspirations, directed by Michael Apted. Filmed during the production of Bowie’s 1995 album Outside, Bowie is sitting at a black Apple PowerBook, in front of a sentence randomizer app he designed for writing the album’s lyrics. Bowie gestures to the screen: ‘It’s a program that I’ve developed with a friend of mine from San Francisco, and it’s called the Verbasizer.'”

That friend to whom Bowie refers is Ty Roberts, who was a programmer at Pixar, among other things, and who later went on to co-found Gracenote.

But where the Verbasizer would take headlines and news stories and jumble them up to help Bowie come up with lyrics, to verbasize something is to take a noun and make it into a verb, giving the resulting verbasized word a direct, linear connection to the antecedent noun.

This is different from a word already having both a noun and a verb meaning (such as the word ‘exercise’). Something which has been verbasized was never a verb before – it was only a noun..until it wasn’t.

Again, think of Google and ‘to Google’.

Our language is replete with examples of nouns becoming verbs, however, as Hird notes, things are being verbasized at a much faster clip as technology evolves, and in fact many of the more newly verbed nouns come from the technology sector. To Google, to Skype, to Uber, etc..

Of course not everybody loves this, so at this juncture we are going to invite you to rant about your least favorite nouns which have become verbs; which nouns qua verbs set your teeth on edge, whether you come across them in written form while computering or Interneting, or you just hear them while radioing or out Starbucking?

Number of people who have enjoyed this article: 1,215