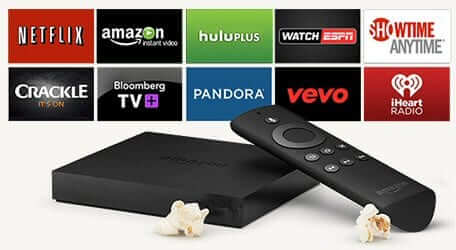 Amazon has launched their own competitor to Apple TV known as fireTV.  Like its competitors it offers streaming video directly to ones television through an internet connection.  Amazon hopes to improve upon competitors and obviously take a bite out of the streaming market. 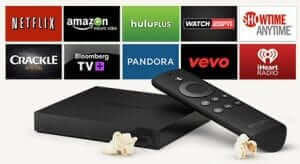 Amazon hopes to win with fireTV on two fronts.  The first would be to take some more traffic away from Netflix.  While both Netflix and Amazon Prime offer streaming tv shows and movies as well as their own exclusive tv shows, Netflix’s catalog is much larger at this point.  Amazon hopes to bring in more users by offering another way to access their content.

FireTV is also a direct attack on competitors that have devices made for streaming video on the television – and there are several now.  While Apple TV is best known, there are also devices available from Microsoft, Google, Samsung, and Vizio.

One unique feature that fireTV boasts is a remote control that includes a voice recognition feature to search for content.  Another feature is that fireTV doubles as a casual gaming console.  Users will have access to thousands of free and paid game apps and will have the option of buying a gaming controller that will work along with fireTV.

Amazon also took a swipe at rival consoles by quoting directly from reviews on Amazon that found the other devices to be “too frustrating.”  They had sluggish performance, inadequate search tools, or had a closed ecosystem of apps.

While fireTV is meant to boost Amazon’s products, it provides access to competitors’ apps as well including Netlfix, Hulu Plus, and several other services.

Amazon has priced fireTV at $99 and the product is available immediately for purchase.

Introducing Amazon Fire TV: The easiest way to watch Netflix, Prime Instant Video, Hulu Plus, and more on your HDTV

Fire TV is a tiny box that plugs into your HDTV. It’s the easiest way to enjoy Netflix, Prime Instant Video, Hulu Plus, WatchESPN, low-cost video rentals, and more. With instant access to over 200,000 TV episodes and movies, plus all your favorite subscriptions and streaming services, you can watch what you want, when you want. If you’re a Prime member, you get unlimited access to thousands of popular movies and TV shows, including exclusives like Downton Abbey, The Americans, Alpha House, and Under the Dome.

Fire TV has voice search that actually works. The old way of searching with a TV remote—scrolling and clicking one letter at a time on an alphabet grid—is painful. With Fire TV you simply speak the title, actor, or genre into the remote and you’re done.

Fire TV may be tiny on the outside, but it has huge hardware specs on the inside. It has a powerful quad-core processor, dedicated GPU, 2 GB of memory, and dual-band, dual-antenna Wi-Fi. With a fast, fluid interface, high definition 1080p video, and Dolby Digital Plus surround sound, Fire TV looks—and sounds—amazing. We also added an exclusive new feature called ASAP that predicts what movies and TV episodes you’ll want to watch and gets them ready to stream instantly. No one likes waiting for videos to buffer.

As a bonus, we also added games. With Fire TV you can play blockbuster titles like Minecraft, The Walking Dead, Monsters University, the Amazon exclusive Sev Zero, plus great free games. There are over a hundred titles to explore, with thousands more coming soon. These games are a great value—the average price of paid games is only $1.85.

Now You Can Drop Off Amazon Returns at a Kohl's Near You
How to Become an Amazon Reviewer and Get Free Stuff
Spend $10 at Whole Foods By July 16 and Get $10 Credit on Amazon!
Get a Free Trial of Amazon Prime with this Free Amazon Prime Membership Offer!
How to Add Your Amazon Store Card as a Payment Option, How to Find the Expiration Date, and How to M...
Amazon Opens Full-Scale Brick and Mortar Amazon 4-Star Store in Colorado, New York, with Berkeley on...
How to Remove Personal Pictures from Your Alexa Echo Show or Look
It's Not Too Late to Avoid These 5 Amazon Prime Day Mistakes
Share the knowledge

Number of people who have enjoyed this article: 1,648