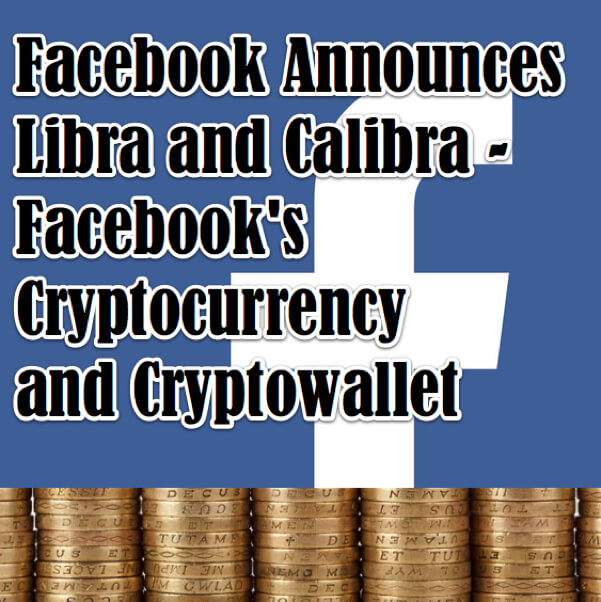 Facebook has announced Facebook’s new cryptocurrency Libra, along with Facebook’s crypto wallet Calibra, and it’s that cryptowallet that may be the bigger consumer news. Is Facebook trying to become a cryptobank? Exactly what is Facebook Libra and what is Calibra? And how are Facebook Libra and Calibra different from Bitcoin and other, more established cryptocurrencies and cryptowallets? Here’s the skinny, along with a list of the founding members of Libra, which include Uber and Paypal and many others.

First of all, we say “sort of” above because while Facebook has announced Libra, it won’t be launched to the general public until, Facebook says, the second half of next year (2020). However, Facebook already has a dedicated site up at libra.org, where you can find all sorts of information as well as the white paper on Facebook Libra, and Facebook does already have it going in a sandbox at https://developers.libra.org/.

According to some experts, Libra is not a true blockchain currency. In fact, cryptocurrency expert and author of both Mastering Bitcoin and Mastering Ethereum Andreas Antonopoulos said today that “Is Facebook’s Libra a real blockchain? No. Will it compete against #Bitcoin and truly open, public blockchains? Never.”

Antonopoulos also said that “While Facebook’s Libra doesn’t compete against any open, public, permissionless, borderless, neutral, censorship-resistant blockchains, it *will* compete against both retail banks and central banks,” adding that “This is going to be fun to watch.”

So, if Libra isn’t a blockchain currency, but “will compete against both retain banks and central banks”, just what is Facebook Libra?

To put it super simply, but not terribly illuminatingly, Facebook says that it is “simple global currency and financial infrastructure.”

To elaborate, according to Facebook, Libra is part of Calibra, which is “a newly formed Facebook subsidiary whose goal is to provide financial services that will let people access and participate in the Libra network. The first product Calibra will introduce is a digital wallet for Libra, a new global currency powered by blockchain technology. The wallet will be available in Messenger, WhatsApp and as a standalone app — and we expect to launch in 2020.”

Well, technically they are both correct, because Libra utilizes blockchain technology but is not itself a blockchain-based currency.

In the article, Lopp observes that “here is no actual blockchain data structure in the Libra protocol — blocks are more of a virtual / logical construct that are used for the purpose of coordinating confirmed snapshots of the system state. Now the first sentence of the section [of the Facebook paper] makes more sense [where it says that]: “All data in the Libra Blockchain is stored in a single versioned database. A version number is an unsigned 64-bit integer that corresponds to the number of transactions the system has executed.” ”

There is a whole lot more detail, and diagrams, in Lopp’s article.

So back to just what is Libra – or perhaps more to the point, what will it do for the average consumer?

Crypto wallets are nothing new (what a weird thing to be able to say, eh?). Most consumers are familiar with Apple Wallet, and there are dozens of Bitcoin and even general cryptocurrency wallets (cryptowallets) available for both Android and iOS. In fact, Finder.com has a list and reviews of at least seventy cryptowallets! (There are also great explanations of the various types of cryptowallets and their risks and benefits there.)

To explain Facebook’s Calibra cryptowallet (and to see why we say that from the consumer standpoint that is really the primary product), Facebook may say it best:

If you have an internet connection today, you can access all kinds of useful services for little to no cost — whether you’re trying to keep in touch with family and friends, learn new things or even start a business. But when it comes to saving, sending and spending money, it’s not that simple.

For many people around the world, even basic financial services are still out of reach: almost half of the adults in the world don’t have an active bank account and those numbers are worse in developing countries and even worse for women. The cost of that exclusion is high — approximately 70% of small businesses in developing countries lack access to credit and $25 billion is lost by migrants every year through remittance fees.

This is the challenge we’re hoping to address with Calibra, a new digital wallet that you’ll be able to use to save, send and spend Libra.

From the beginning, Calibra will let you send Libra to almost anyone with a smartphone, as easily and instantly as you might send a text message and at low to no cost. And, in time, we hope to offer additional services for people and businesses, like paying bills with the push of a button, buying a cup of coffee with the scan of a code or riding your local public transit without needing to carry cash or a metro pass.

Perhaps the most interesting – or at least less common – aspect of Calibra is the save aspect. Lots of digital wallets and currencies let you send and spend. But not so many of them facilitate saving.

As Antonopoulos said, this will compete against banks, and this will be fun to watch. Or at least interesting.

What is interesting, despite Libra being available primarily through Facebook-owned entities such as WhatsApp and Facebook Messenger (although you can also sign up directly with a government-issued ID), is that each founding member on the Libra Association board gets only one vote, including Facebook.

You can read more about Calibra, including the FAQ, at Calibra.com.

About All Those She's Gone Ads on Facebook
Walmart Applies for Patent for New Walmart Coin Cryptocurrency
Insiders Urge Facebook and Apple to Fix Toxic, Intentionally Addictive Nature of Social Media and De...
Here's How to Get Rid of That Gawd-Awful Annoying Facebook Comments Popout Pop-Up
Facebook Goes Down
Words with Friends Hacked - Data of 218 Million WWF Users Breached Along with Zynga Draw Something
New Facebook Safety Check Offers Check-in for Users in Disaster Zones
How to Change the Privacy Settings for Things You Share to Facebook
Share the knowledge

Number of people who have enjoyed this article: 1,493