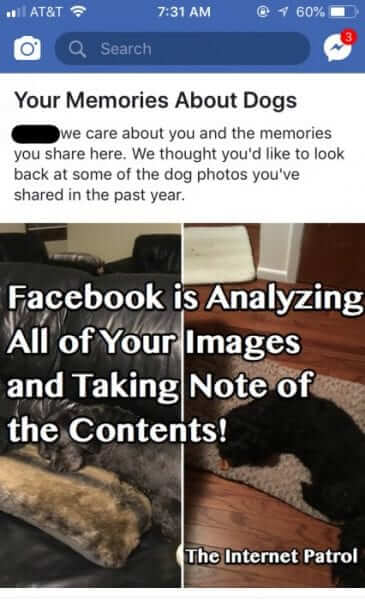 Facebook has, perhaps unintentionally, revealed that they are analyzing all of your images, taking note of the content of those images, and using what they find to further their reach. Just yesterday we reported that Facebook announced that the images – even unpublished images – of millions of users had been exposed to unpermitted access. The takeaway? Any image you upload to Facebook will be exploited, not least of which by Facebook.

Proof that Facebook is Analyzing Your Images and Noting the Contents

Look at this screen capture of a message that one of our editors received from Facebook just yesterday (December 16, 2018). Note that Facebook says “We thought you’d like to look back at some of the dog photos you’ve shared in the past year.” Here is what is important to know: At no time did this person post the word ‘dog’ along with these pictures. This means that Facebook scanned the content of the picture and determined that there was a dog in the image, and then used that information to market back to the user. 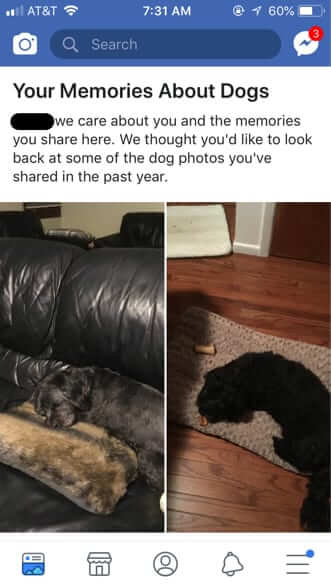 Now, of course, telling you that you have a dog (cat, horse, child, baby, banana, car, whatever) in your images, and saying that Facebook thought you’d like to look at some of those images seems innocent enough. Until you really think about it.

That last – ads following you around the Internet – is known as remarketing, and as we explain about remarketing here, remarketing allows advertisers whose websites you have visited to show you their ads as you browse around the web.

Now, Facebook allowing their advertisers to advertise to you on Facebook based on your travels elsewhere on the web has been going on for years (read our article Facebook Stalking Your Browser and App Use to Target Ads to You here).

So has Facebook’s allowing their advertisers to target their audience with a high degree of granularity. And, in fact, ‘interests’ is one of the ways that these advertisers can target you.

However, we think that scanning and analyzing your images, and using that data to target you is a new low even for Facebook.

Now, we don’t (yet) have evidence that this is one of the ways that Facebook is compiling it’s dossier about you and your interests, but how could it not be?

Using data derived from analyzing the content of your images, when the average person still thinks of an image as a single unified image, not something which can be analyzed for discrete object recognition (facial recognition not withstanding), falls into the “just because you can do it doesn’t mean that you should do it” area.

So far we have only thought of this one obvious use of the intel gleaned from object scanning of your images on Facebook. It’s likely not the most nefarious one.

How to Convert an Audio File to Video to Post an Audio File to Facebook or YouTube in 1 Easy Step!
Tesla: Data Security Hell on Wheels?
How to Create a Strong Password
WhatsApp Users Leaving for WhatsApp Alternatives in Droves Following Facebook Acquisition
SnapChat Rejects Facebook Offer of $3Billion - True. Rejection Letter - False.
How to Improve Your Facebook Experience 1000% with this Simple Free Facebook Tool
Internet Deception: Why It's So Easy and How to Detect It
Facebook Defends Their Facial Recognition Technology to the Senate Judiciary Committee's Subcommitte...
48shares