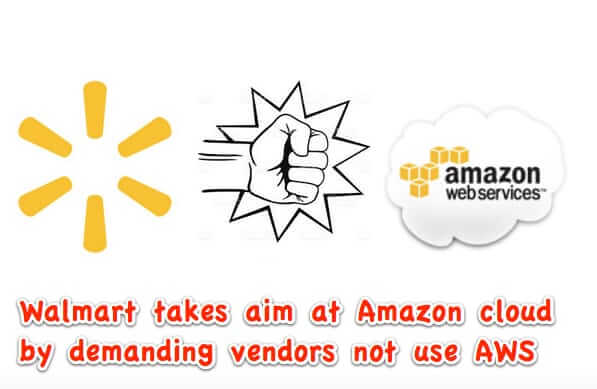 There is a new kind of war going on up in the clouds, and it does not involve anyone from the pantheon of Greek mythology. Its mega-retailer Walmart versus mega-retailer Amazon, and the pawns in their battle are the vendors who want to do business with Walmart.

In a stunning revelation, last week the Wall Street Journal reported that Walmart is telling their vendors that they need to stop using Amazon cloud services (The primary one of which is Amazon Web Services, AWS for short) if they wish to have a business relationship with Walmart.

For example, a vendor working with Walmart contacted Snowflake Computing, a data storage service, about working with them to facilitate the business the vendor gets from Walmart. Snowflake CEO Bob Muglia told the Journal that in order to gain their business, Snowflake had to provision their service with Microsoft cloud service, Azure, and not Amazon’s cloud service.

“They influence their vendors, which has influence on us,” Muglia told the Journal.

Another such a vendor, software developer Lofty Labs, puts it much more succinctly. Lofty was approached to develop retail forecasting tools for Walmart which would reside in the cloud.

According to Casey Kinsey, Lofty’s president, “Everybody knows that Walmart will not play ball with you if you use AWS.” In order to secure the new business, Lofty was required to develop the application in Azure, and not use Amazon’s service.

As a result, because they wanted the business, Lofty developed it on Microsoft’s Azure, the only time that they have ever developed an app on Azure.

For their part, Walmart spokesperson spokesman Dan Toporek confirmed the practice, saying that “It shouldn’t be a big surprise that there are cases in which we’d prefer our most sensitive data isn’t sitting on a competitor’s platform,” adding that it is “a small number”.

So what do you think about what Walmart is doing here? Anti-competitive? Good business practice? Tell us your thoughts!

Newest Amazon Order Scam Spam
Now You Can Drop Off Amazon Returns at a Kohl's Near You
Fake Amazon "Your Confirmation" Phishing Emails Hide Canadian Pharmacy Spam
Send Donation Items to Your Favorite Humane Society with a Click!
Amazon's Hachette Job on Book Publishers
Amazon Accused of Cloning Vendor Products and Undercutting Them: Time for Antitrust Breakup of Amazo...
Amazon Key: For When You Feel Like Letting a Stranger Into Your Home When You're Not There
Amazon Alexa Skills Suddenly Not Working? This May Be Why and How to Fix It
Share the knowledge

Number of people who have enjoyed this article: 469