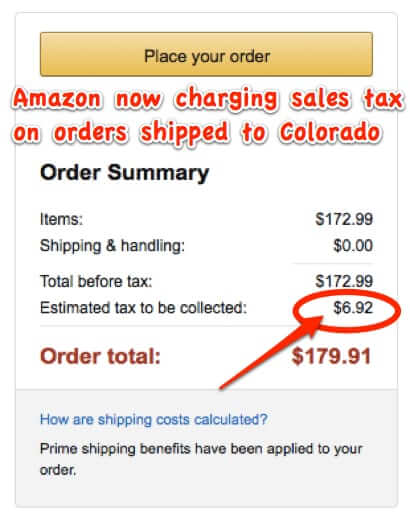 While technically Amazon was set to collect, and was in theory collecting Colorado’s 2.9% sales tax on Colorado orders effective last month, as the result of a court decision in Colorado’s favor which allowed Colorado to require that Amazon collect those taxes despite Amazon not having a physical presence in Colorado, Colorado Amazon customers only started regularly seeing that tax this week, and the Denver Post reported on it just yesterday, March 3rd.

The move culminated years of wrangling by Colorado to have Amazon collect and cough up the state sales tax, a result which Colorado lawmakers expect to return to the state treasury millions of dollars which Colorado estimates it has lost by not being able to collect sales tax on goods sold within Colorado.

But thanks to a twist at the hands of the good people of Colorado, at least some of that sales tax ‘revenue’ could bypass the state altogether, and go right back to the people, owing to what some are calling the ‘boomerang effect’ of Colorado’s Taxpayer’s Bill of Rights (TABOR).


Colorado is the only state to have a formal TABOR. Put very basically, under the relevant part of the Colorado TABOR the state is restricted in what it can do with any tax revenues that are not already preapproved and accounted for by voters, and the state must refund to Colorado voters any tax revenues that grow faster than the rate of inflation and population growth, or which otherwise grow faster than the so-called TABOR surplus limit. Colorado has already refunded more than $2billion in TABOR surplus to Colorado voters.

Even the state admits that this newfound sales tax revenue may very well end up going right back to the voters, in the form of tax refunds.

Says the Colorado Legislature’s Chief Economist, Natalie Mullis, in an interview in yesterday’s Denver Post, “Assuming that we’re right, new sales taxes collected this fiscal year will not be refunded and will increase the amount of money available for the budget. However, any new taxes collected beginning next year will increase the amount required to be refunded to taxpayers.”

According to estimates, Colorado will get to keep all of about 5-months’ worth of the sales tax that Amazon collects, and then will have to start rebating it back to Colorado tax payers for at least the next two years, if not beyond.

Opined Tim Hoover, with the Colorado Fiscal Institute, “There’s really no point in celebrating some windfall… when we have been pushed over the TABOR line by a fake surplus.”

What to Do if Amazon Says that They Never Received Your Amazon Return
Authors and Publishers: How to Opt Out of Amazon's Kindle Lending Service for Your Kindle Book
Amazon Launches Fantasy Adventure Game on Echo
About the New Amazon Pharmacy - You Knew it was Only a Matter of Time
President Obama's Support of Amazon Angers Independent Book Sellers
Is It Possible to Delete Yourself From The Internet?
Amazon Echo Series – Part 3: Cool Amazon Echo Commands, Tips, Tricks and Things to Try
Here's what Amazon is Recording and Storing for Their Use When You Talk to Alexa on your Amazon Echo...
Share the knowledge

Number of people who have enjoyed this article: 1,633