Last week we reported that the Amazon Kindle was getting an app store and lots of new applications, and we asked the question, “but why?” Among other things, we pointed out that with the lack of a touch screen, any applications for the Kindle would be severely limited in terms of functionality, usefulness, and just plain fun. (You can read our discussion of Amazon announcing Applications for the Kindle here.)

Well, guess what. It seems that the Kindle is getting a touch screen.

According to reports in both the New York Times and the Wall Street Journal, Amazon has just purchased a small touch-screen start-up in New York called TouchCo.

While Amazon is being remarkably closed-mouthed about the deal, saying that they won’t “comment on rumors and speculation,” both the Times and the WSJ cite persons briefed on the deal as their source. Touchco’s website has been wiped clean, and says simply “Thank you for your interest in Touchco. As of January 2010, the company is no longer doing business.”

Touchco may have been small (under a dozen employees) but they bring something big to the Kindle table: their innovative flexible, inexpensive, multi-touch touch screens. 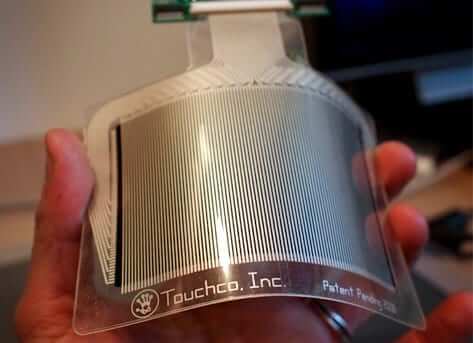 TouchCo’s screens use “interpolating force-sensitive resistance” technology, which not only are flexible and durable, but are said to be able to sense and interpret multiple touches at the same time. And, their technology is substantially less expensive than many other touch screen technologies, such as those used in the iPod, iPhone and iPad. TouchCo’s technology is said to ring in at just $10 a square foot.

Will Amazon call their new device the “Kindle Touch”? And will Apple sue them for using the word “touch”?

Of course, the real big question is, will a touchscreen Kindle’s entrance in the market be too late? We think probably not, because while there may be other touch screen devices that serve as digital book readers (such as the iPad), so far none of them have both a touch screen and the extensive library of books from which to draw.

Of course, once Google brings out a tablet, pad, or book reader – given Google’s project of putting every book in the world online – all bets are off.

Amazon Alexa Skills Suddenly Not Working? This May Be Why and How to Fix It
How to Remove Skills from Alexa without Having to Go Through the App
Hire a Goat on Amazon!
It's Not Too Late to Avoid These 5 Amazon Prime Day Mistakes
Amazon Acquires Pill Pack Pharmacy Making Amazon as Full Service as Walmart, Target and Costco
Hands On with Echo Loop - the Alexa Ring You Wear on Your Finger
Amazon Lockers Starting to Dot the Country
About the Amazon Gift Card in Your Mailbox Scam
Share the knowledge

Number of people who have enjoyed this article: 3,787