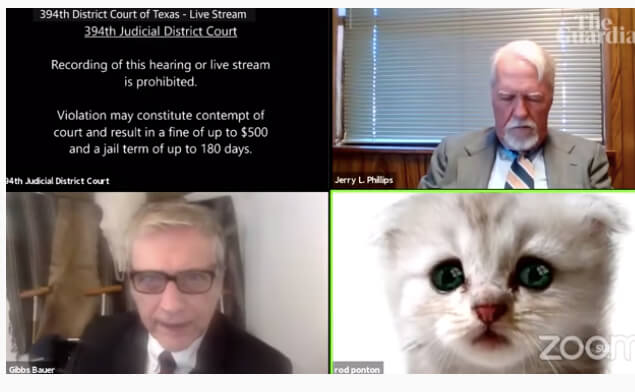 If you are wondering what the deal is about the lawyer kitten Zoom filter (also called the ‘lawyer cat Zoom filter’), here’s what it’s all about. It all started when lawyer Rod Ponton, an attorney practicing in Presidio County, Texas, checked in for a remote court appearance via Zoom.

Now, of course, a year into a global pandemic, people have been using Zoom for all sorts of things, including legal proceedings, so it’s not at all unusual that Ponton would be appearing before the court via Zoom.

Here’s the video – the article continues below.

Judge Ferguson: Mr. Ponton, I believe you have a filter, turned on in the video settings. You might want to..ah..take a look at …

Attorney Ponton: Argh. Can you hear me, Judge?

Judge Ferguson: I can hear you, I think it’s a filter…

Attorney Ponton: I don’t know how to remove it. I’ve got my assistant here and she’s trying to.

Attorney Ponton: I’m prepared to go forward with it. I’m here live. I’m not a cat.

Judge Ferguson: I can see that. I think if you click the up arrow next to the (unintelligible)

Said Ponton, of all of the attention that the video has received, “If I could make everyone laugh at my expense I’m happy to do that. It’s an example of what can happen in our computer connected world.”

Meanwhile, Judge Ferguson has used the situation as a teachable moment. “IMPORTANT ZOOM TIP” said Judge Ferguson on Twitter, “If a child used your computer, before you join a virtual hearing check the Zoom Video Options to be sure filters are off. This kitten just made a formal announcement on a case in the 394th. #lawtwitter #OhNo @zoom_us” 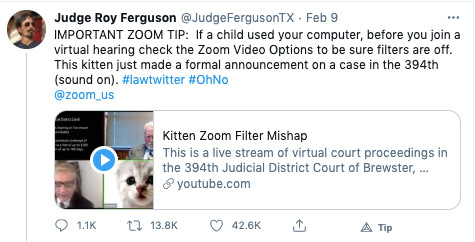 The judge also observed, in interviews, that “If you watch carefully, no one mocked him or laughed at him, it just showed the professionalism and the dignity that these lawyers bring to virtual hearings,” noting that he was proud of how these lawyers comported themselves.

In fact, despite the caution clearly displayed on the screen, warning that recording of the hearing or live stream is prohibited, that doing so may be contempt of court, and that a violation could lead to a fine of up to $500 and a jail term of up to 180 days, Judge Ferguson actually preemptively gave the media permission to use the video, saying, in another Tweet, “Media outlets, you may use the video. It was recorded during a virtual hearing in the 394th DC of TX, and released for educational purposes. It is crucial that this not be used to mock the lawyers, but instead to exemplify the legal community’s dedication to the cause of justice.”

All we can say to that is that we ..er… conpurr.

People also searched for what is the cat filter award

Potato Salad Kickstarter Explained (and We Answer Who is Potato Salad Guy Zack Danger Brown?)
Darth Vader Posts Selfie to Instagram
We Get Some Strange Searches
Drive-Thru Lets Fast Food Customers Pay with EZ-Pass
Online Startup Plans Surprise Weekend Get-Aways for You - All You Have to do is Show Up
What is a Selfie Stick, and Do You Need One?
What is the new viral Mannequin Challenge? We explain #MannequinChallenge 2016!
Is World War Goat Coming?
19shares 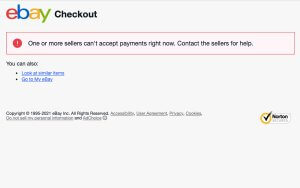 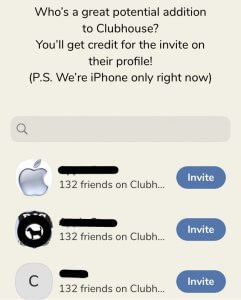 What is Clubhouse? Easy Clubhouse Tutorial and And How to Refresh Contacts in Clubhouse so it Sees New Contacts
WP RSS Plugin on WordPress
19shares