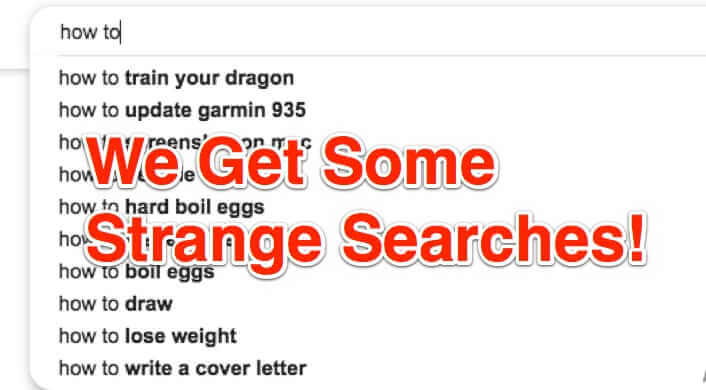 It’s always interesting to look at your web logs, to analyze the search terms which people have plugged in to the search engines just prior to finding your website, and to see what sorts of strange paths people have taken to find you. Usually the search terms are fairly pedestrian, but every so often a strange one pops up. Or maybe even a few.

By far the search that leads people to us the most is searching for the telephone number 402-935-7733. As it turns out, that telephone number is a number for Paypal, and it shows up on a lot of bank statements, with no clear explanation as to why its there. So a lot of people are searching for it, and they end up at our article Are You Showing a Mystery Charge from 402-935-7733 via Paypal in Your Bank or Credit Card Account? Here’s Why


Of course, that search is understandable. However some are just perplexing. Some time ago we had a particularly interesting period for our search logs, and so we thought that we’d share a few of the more ..um ..unusual terms with you.

First, someone was searching for “big aunty”. Now, we don’t know whether they were actually trying to find Aunty Spam (our previous incarnation), or whether you could classify Aunty Spam as “big”, but there it is. Perhaps they meant it as in “big momma”, or in that Nurse Ratchet kind of way.

This somehow naturally lead to the next search term, “sex with aunty”. Ok, now, I just don’t even want to know. In fact, there is no interpretation of that search term which makes it any better.

Somewhere along the way, some poor soul apparently had a mishap which lead to their losing some of their portable devices, as their search was for “activating lost verizon cellphone”, although why you would want to activate a lost phone is beyond us, unless you were the one who found it. Perhaps it was one of the people who lost their cell phone down the toilet.

But oddest of the search terms – the one which made us realize that we had to share some of these with you, was this one: “Aladdin naked”.

Sometimes even we just have to say “WTF?”

Of course, now it’s 2019, and that new live-action Aladdin film is coming out..so you never know…

So tell us – if you ended up here because you were searching for something, what was the search that led you to the Internet Patrol?

3 thoughts on “We Get Some Strange Searches”