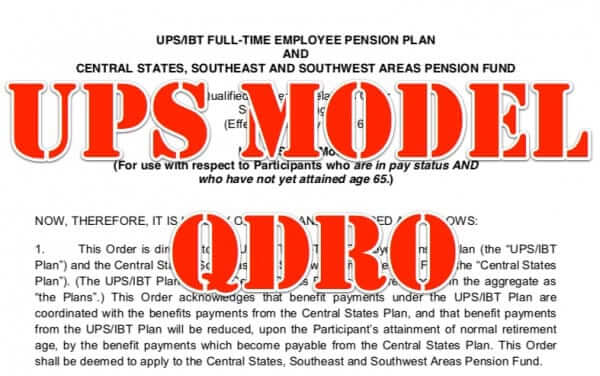 Why are we writing about UPS QDROs on a site devoted to all things Internet? And just what is a QDRO? The answer to the first question is because people are searching for the UPS model QDRO (also the Central States model QDRO as it relates to UPS) online, and it’s crazy that such a standard form isn’t readily available on the Internet, so we decided to make it so!

Typically, if the benefit was earned during the marriage, the other spouse will be entitled to some portion of the benefit payout, and that’s where the QDRO comes in. The QDRO orders the benefit administrator to divide the benefit payments between the parties, and to send each party the payments to which they are entitled under the benefit.

QDROs are notoriously complicated, in large part because each individual pension and other retirement plan has their own requirements as to what needs to be in a QDRO directed to them. This is why many places provide a model QDRO form, and UPS is no exception.


Now, you would think that given the presumably vast numbers of people retiring from UPS, that it would be in UPS’ own best interest to make their model QDROs (yes, plural – we’ll get to that) available online.

In fact, at one time that information was available online, at www.ibtupspensionfund.ups.com, however that website is no longer available (probably much to the frustration of QDRO attorneys and UPS retirees alike, as they search online trying to find the UPS QDRO forms and find articles mentioning that link, only to discover that the link is dead).

Some time in 2015 the process was simplified, and the whole two-QDRO requirement went away. We don’t know whether this is why the www.ibtupspensionfund.ups.com site went away, but here is what we do know: starting on January 1, 2016, a new, unified QDRO replaced the requirement to submit a QDRO to each of UPS/IBT and Central States, and UPS/IBT took on the responsibility of providing Central States with the QDRO information for any retiree who had retired prior to January 1, 2008. And, as such, new model QDROs were promulgated.

Now, you would think that as large an employer as UPS would make their new model QDROs readily available and easily found online, if only because it makes their job so much easier. But, in the immortal words of Steve Martin, noooOOOOoooo.

So we are providing them below.

We would be remiss if we didn’t give a huge shout-out to Phil Phillips, from the Law Office of Philip D. Phillips in Texas, who helped us obtain the UPS model QDROs.

"Remember This Browser?" and Other Cookie-Pushing Questions
Google Webpage Ranking: Do Sentiments Help?
What the Melania Trump Website Looked Like and Said Before it was Taken Down
As "ServerGate" Unfolds, Obama Calls for Tech Surge
The Internet, Is It Good or Bad For Democracy?
An Internet Patrol Exclusive Poll: Automatic Chat Robots - Love them or Hate them?
What Does ?, &, or _RDR Mean in a URL?
Technologies that Will Shape Your Internet Use in the Future
ups ibt pension fund, ups qdro form
Share the knowledge

Number of people who have enjoyed this article: 2,086