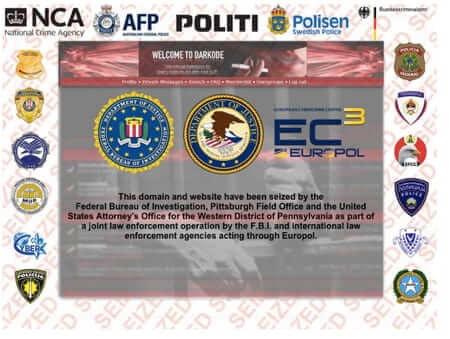 Last month the U.S. Justice department announced the takedown of the Darkode (get it? DarkCode – Dark Code?) international cybercrime ring, which the DOJ called one of the “gravest threats” to the security of online data. But what exactly does that mean to you, the average user sitting at home behind your computer?


Of the roughly 800 criminal internet forums worldwide, Darkode represented one of the gravest threats to the integrity of data on computers in the United States and around the world

Darkode operated from behind the domains Darkode.com and Darkode.me, where it claimed to be “An international marketplace for sewing machines and other legal stuff.”

An international marketplace for sewing machines and other legal stuff

However, as July 15th, 2015, after The FBI, Europol, and cybersecurity and law enforcement agencies from a total of 20 different countries made their move, made the arrests, and shut down the site, the Darkode site was pwned. (Not familiar with the term ‘pwned’? We explain it, and more, here.)

Both the Darkode.com and Darkode.me sites now bear this announcement

Some of the targets were responsible for hacking into Sony’s PlayStation Network and Microsoft’s Xbox Live services last year around Christmas, authorities said.

Several law enforcement agencies around the world, including Europol, cooperated and participated in the bust.

Says a Europol statement, “The curtain fell on the cybercriminal forum when the site was taken down and a banner was put up online indicating that the FBI, EC3 and international partners had control over the site. This signified the end of Darkode, the most popular English-speaking hacking forum ranking in the top five of the most prolific criminal forums worldwide, a ranking otherwise dominated by Russian-speaking criminal platforms.”

So, what does this mean for you? It means that there has been, if you’ll excuse the phrase, a disruption in the (underground criminal) force.

In fact, perhaps Europol’s director, Robert Wainwright, says it best, when he says that the takedown “caused significant disruption to the underground economy, and is a stark reminder that private forums are no sanctuary for criminals and are not beyond the reach of law enforcement. We will continue to work with our law enforcement partners to make cyberspace as crime-free as possible for the world’s citizens.”

Number of people who have enjoyed this article: 1,486