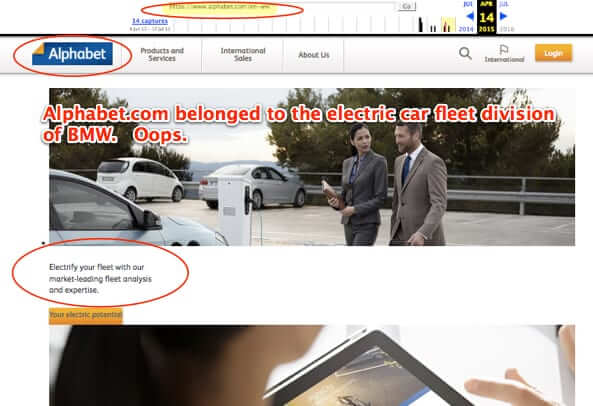 Google announced this week the formation of a new parent company, Google Alphabet Inc. This will be akin to a Google holding company, the parent company of such Google businesses as Google Ventures, Google Capital, Google X, Next Labs, and Google Inc. itself.

However, not unlike other incidents where Google has an idea but doesn’t bother to check on the domains they associate with it, they apparently didn’t actually check the domain Alphabet.com for their latest venture.

Turns out that Alphabet.com was owned by BMW, and used for their Alphabet electric car fleet subdivision. Oops.

In fact, BMW has owned alphabet.com since 1995. 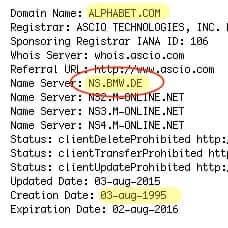 So, Google went ahead and got the domain abc.xyz (abc.com of course belonging to someone else), and this is where they are presently housing their Google Alphabet information.

However, the Alphabet.com website no longer loads, and in fact, a change to the domain was posted just today:

So odds are good that they managed to negotiate with BMW to acquire the alphabet.com domain, but just as after the fact as with this domain oopsie.

All that said, we speculate that in this case the negotiations for the BMW-owned domain were already well under way before Google decided to announce Alphabet.

We’d still love to know what they paid for the alphabet.com domain, which they will likely have to disclose in their next quarterly financial disclosures.

[UPDATE: Our awesome friend Lauren Weinstein over at vortex.com noted that other WHOIS servers show the domain still being owned by BMW (our bad, mea culpa, and all that). Also that BMW says they are not going to release the domain to Google, and that any server unavailability is due to their server being overwhelmed by the news. We note that at the time of this update, alphabet.com is indeed back up with BMW’s Alphabet info.]

Google Photos Will No Longer Back Up Images From Messaging Apps by Default
Is It Possible to Delete Yourself From The Internet?
Issue with Quickbooks Can Cause Under-Reporting of 1099 Income
Track Who is Sharing Your Email Address by Using Tagged Addresses in Gmail
The Pros and Cons of Using the Chrome Password Manager
Google Pay: What it is, and how to use it
What to Do About Spam from a Gmail or Google Account
How to Have Gmail Automatically Delete Spam in Your Spam Folder
Share the knowledge

Number of people who have enjoyed this article: 1,578