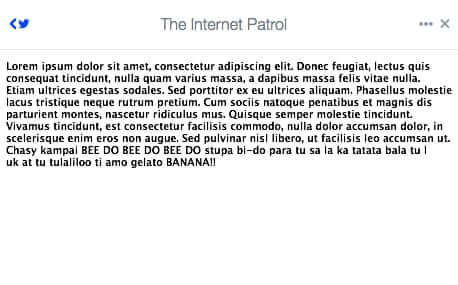 Now that they have trained us to fit all of the relevant information into 140 characters, Twitter has announced that they are removing the character limit and lifting the length restrictions on private, direct messages.

Explains Sachin Agarwal, Product Manager for Direct Messages at Twitter, in today’s announcement, “Direct Messages let you have private conversations about the memes, news, movements, and events that unfold on Twitter. Each of the hundreds of millions of Tweets sent across Twitter every day is an opportunity for you to spark a conversation about what’s happening in your world. That’s why we’ve made a number of changes to Direct Messages over the last few months. Today’s change is another big step towards making the private side of Twitter even more powerful and fun.”

So, why is Twitter lifting the restriction, we mean other than that they were kind of pointless to start with (technical reasons excepted)?

Most pundits suggest that it is because Twitter is getting serious about being a messaging platform, and taking on apps such as WhatsApp and Viber. We think it’s also about taking on Facebook. Regardless of who they are taking on, it’s clear that the race to convergence is far from over.

Starting today, Twitter is rolling out unlimited direct messages across the iOS and Android apps, and Twitter.com. You’ll likely need to update your mobile app to get this functionality (although we note that the iOS update issued today did not remove the restriction in our test app).

So, do you have this new function yet, and has it made any real difference for you or in how you use Twitter? Will it?

How to Change Your Twitter Timeline Back to Chronological Order
How to Take Charge of Your Facebook Newsfeed
Social Media Campaign for Kidnapped Nigerian Girls Using Photos of Wrong Kids
Elected Official Puts the "Weiner" in, Uh, Weiner
Amy Strickland - Every School Board's Nightmare or Nah?
5 Rising Social Media Platforms to Watch-If You Are Business Minded
What You Need to Know about Twitter's New Terms of Service and Shadow Banning, and Rights to Your Co...
Full Text of President Trump's Executive Order Against Twitter, Facebook and Other Social Media
Share the knowledge

Number of people who have enjoyed this article: 1,279