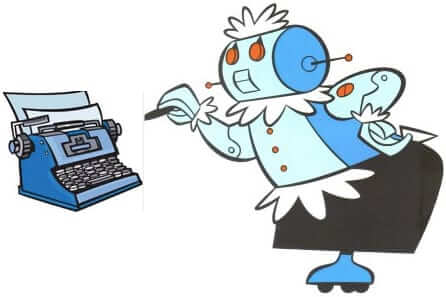 Many online articles these days are not written by humans – rather they are written by writing bots, giving rise to the term ‘robot journalism’. Of course, these aren’t actual robots, rather it is a software program, programmed to synthesize data and spit out articles.

And it isn’t just news sites that are using these news bots; in fact, as American Journalism Review points out, in Twitter’s SEC filing last year, they disclosed that fully 8% of their accounts are actually bots. AJR estimates that means that as many as 23million Twitter accounts may actually be automated post bots.

Perhaps the best-known newsbot is Ken Schwencke’s Quakebot. As an article in Slate explains, “Whenever an alert comes in from the U.S. Geological Survey about an earthquake above a certain size threshold, Quakebot is programmed to extract the relevant data from the USGS report and plug it into a pre-written template.”

Then Schwenke looks it over, and has final editorial control before hitting ‘publish’, at which point it is published to the L.A. Times website, where Schwenke is a reporter.

After writing the Quakebot program, Schwenke wrote another journalist bot – Homicide bot, which now spits out first-on-scene articles on homicides for the L.A. Times.

Now, Ken Schwenke’s journalbots are highly specific, and publish stories only for the L.A. Times, and then only after Schwenke reviews them.

However, this is not the case for countless articles and reports that are now posted on the Internet. In fact, a company called Automated Insights is banking on it. Literally.

However, as with so many things in life (and business), just because you can do something doesn’t mean that you should do it. And such is the case with bot journalism.

As journlist Mary Anne Keane notes in her article on robot journalism at SpinSucks.com, while bots may get the facts out quickly, “the real meat of journalism comes in the descriptive details provided by a human.”

The thing is, you can’t ever know whether or not an article – or other Internet content – that you are reading was authored by a living, breathing, thinking human*, who researched the facts and then used judgement in determining the context into which to put those fact, or a software program which is, after all, only as good as its programming.

*This article was written by a real, live human.

What are your thoughts on so-called robot journalism? Let us know what you think!

Internet addiction: Is it Time to Unplug?
Charlottesville Incident Gives Rise to Social Media Mobs and Online Justice
You May Have Money Owed to You Right Now That You Didn't Know About! It's Called Unclaimed Property
Administration's New Disinformation Governance Board Confirmed During House Hearing
New Online (and Offline) Dating Term Trend: Houseplanting Dating
Do You have a Finstagram (Fake Instagram) Account?
Online Full Text of Michael Cohen's 2/27/19 Testimony Before the Committee on Oversight and Reform
Now You Have to Buy a Ticket for Some Restaurants and You can also Scalp them on Craigslist
Share the knowledge

5 thoughts on “Many Online Articles Written by Bots not Humans”

Number of people who have enjoyed this article: 2,232