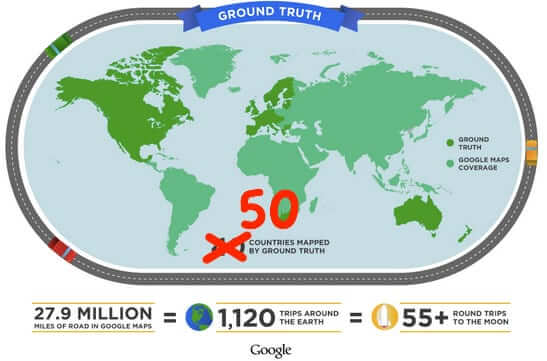 Those Google slippy maps (the term for maps that you can pull around and zoom in or out on) are the result of far more effort than you may realize. The Google street view vans (and backpacks) are only a small part of what goes into the Google mapping project Ground Truth. (A list of countries mapped by Google Ground Truth is below.) 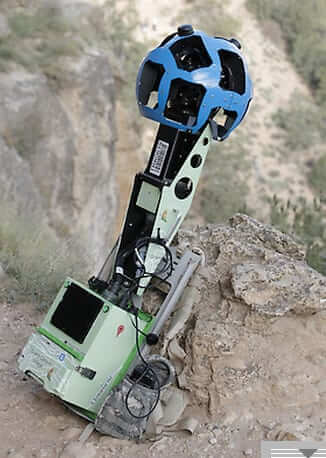 Google Ground Truth, which was initiated in 2008, is Google’s effort to map every bit of the world. They do this by augmenting the data that Google itself generates through Street View efforts and the Google satellites with authoritative data from both governments and NGOs, and then tweaking it further, manually, to address any mistakes, and to add data that is still lacking.

As Google explains of Ground Truth, “[W]e acquire high-quality map data from authoritative sources around the world and then apply a mix of advanced algorithms, supplemental data (including satellite, aerial and Street View imagery), and human input to create a map that corresponds as closely as possible to the real-world facts that you’d find if you were to visit that location.”

Moreover, they say, “But roads and highways alone don’t define the character of a place, and they aren’t always sufficient to help you get around. So Google Maps also integrates information such as walking paths, ferry lines, building outlines, park boundaries, university campuses and more — providing a richer, more comprehensive and more realistic experience for locals, visitors and armchair travelers alike.”

In fact, it was back in 2012 that we first reported that Google maps was taking you inside malls, airports, museums, and more.

Other Google map innovations that have come down the pike, coincident with the rolling out of the Ground Truth project, include things such as mapping ruines such as Pompeii, and, yes, adjusting their practices over privacy concerns, such as introducing face blurring technology for street views.

And as Google Maps have become both more reliable and more detailed, third-parties have come up with some really interesting ways to use Google Maps. For example, the history mashup where you can see ‘now’ and ‘then’ images of locations, and the online Monopoly game using real streets.

But none of this would be possible (or at least possible in their current form) if Google hadn’t rolled out Ground Truth.

While Ground Truth was initiated back in 2008, it wasn’t really publicly talked about until 2012, at which time Google announced that Ground Truth had already fully mapped an astonishing 40 countries.

A few months ago, Google announced that Ground Truth had hit a new milestone – 50 countries mapped.

How to Create a Custom Repeating Event in Gmail Calendar
Top Web Browsers for Android in 2020
How to Set up or Change Your Gmail Signature
U.S. Government in Talks with Google, Facebook, to Track Location of Where Individuals with Coronavi...
How to Get Rid of Gmail's Pesky "On Behalf of" When Sending from Gmail
Google Glass 2 for Developers being Shipped
What Gmails TLS Red Padlock Means - It Doesn't Mean Something Bad!
Google Customer Match Lets Businesses Share Your Email Address with Google, the Better to Target Ads...
Share the knowledge