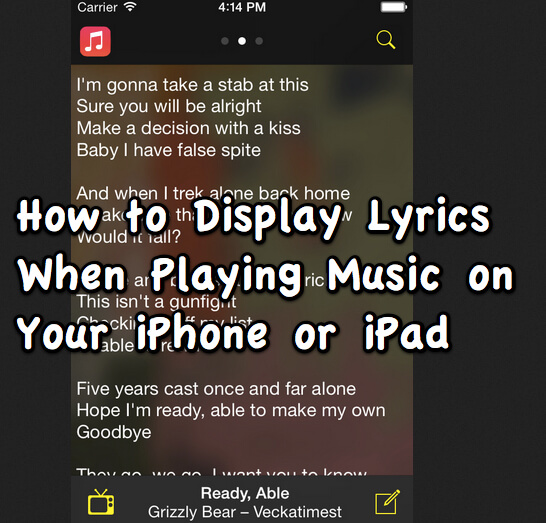 One of the biggest frustrations that iPad owners have had is that with the latest OS upgrade Apple has completely done away with the ability of the device to display stored lyrics from iTunes in the music player when playing music (not to mention that the music player generally now sucks – more on that in a moment). What do we mean by display lyrics stored in iTunes? What, you didn’t know that you can add lyrics to your songs in iTunes, and have them display when you are playing your music? Well now you do (by following that link)! And here’s how have those iTunes stored lyrics display on your iPad while you are playing music.

In order to have your stored lyrics display while you play your music on your iPad, you need a second app. Happily that app is only $1.99 – a teensy price to pay to solve this frustration!


The app is called Camena (link below). Camena will display the lyrics for the song that you are currently playing in the iPad music player – the only real difference between using Camena, and having the lyrics displayed natively like you can on the iPhone or iPod is that the lyrics are open in the Camena screen, not your music player – but we hasten to add that displaying the lyrics is triggered by the music that is playing, just like with the iPod or iPhone.

In addition, if you don’t already have the lyrics attached to the song in iTunes, you can have Camena do a web search and add them. It will even find music videos of the song, if you like.

You can get Camena here

But that’s not all. The UI is gorgeous.

You can check out Bongiovi DPS here

Full Text of iOS 9 User Agreement
Think that You Want the New iPhone X (10)? Read This First
How to Install the Apple Security Update on Jailbroken Phones
How to Deal with the "Operation Can't be Completed Because the Item "Bands" is in Use" Error
Live Online Concerts Provide New Revenue Source for Performers
How to Capture and Record Streaming Video on Your Mac
How to Find Those Big Files Taking Up Space on Your Mac Hard Drive
How Come Email Messages I Delete Aren't in the Trash in Mac Mail?

One thought on “How to Display Lyrics When Playing Your Music on Your iPad 1, iPad 2, or iPad 3 (Yes, It really Works!)”