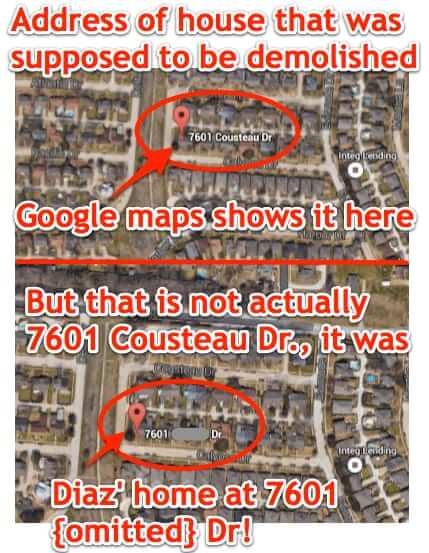 Relying on the Internet as your co-pilot for navigational technology is not without its pitfalls. Sometimes it can lead to humourous situations, like the woman caught peeing in the street by Google maps, but sometimes it can also lead to horrific outcomes, like the Google map that is thought to have lead to the death of James Kim when he took a route suggested by Google maps that was otherwise known to have been treacherous. This week, Google maps is being blamed for the accidental demolition of the home belonging to Lindsay Diaz, of Rowlett, Texas. [UPDATE: Now includes link to contribute to help Lindsay Diaz]

It all started when Diaz’ home, half of a duplex, was ravaged over the holidays by a tornado. Diaz waited out the tornado cowering in a bathtub with her infant son. The tornado resulted in structural damage, including demolishing a wall and part of her roof.

However, after an inspector declared the home sound and ok to be repaired, Diaz applied for and received the necessary permits to fix her home.

Having put the repairs for her home in motion, Diaz was stunned to receive a call from her neighbour this week.

“I was driving home from work and I get a call from my neighbor. She’s very frantic, crying and I asked her ‘what’s going on?'” Diaz recounted to KERA.

Said her neighbour, “A company came and demolished the house by mistake.”

Diaz rushed to where her home should have been, and “found a concrete slab where her duplex used to be.”

According to the demolition company, the demolition workers had used Google maps to get to the job site, and while they had used the correct street address, Google maps showed that address and house as being in the exact same place as Diaz’ home, which had the same street number, but on a different street, one block over.

To be honest, we were a little dubious about this. We wondered if maybe it was a function of them being careless, or not zooming in enough on the map. And, we wondered, even if it were all true, would Google have fixed the issue now that it’s been reported?

Well, the answer to all of those questions is “no”.

Because we have, just now, been able to reproduce these results for ourselves, and for you.

(Note that we have blocked out Diaz’ actual street name, because as the single mother of an infant who went through a tornado, and whose homeowner’s insurance was already not going to cover the full cost of repairs, and who then had her home torn down accidentally, she’s been through enough, and doesn’t need her home address shared across the Internet!)

Is The Internet Changing Our Brains?
Comparing Google Searches in Areas Where Life is Easy to Where Life is Hard
Google Driverless Car Hits Bus
How to Add a 'Send From' Address in Gmail in 2015
Google Using Scare Tactics to Incite Fear of New Legislation in Users of Google Analytics, Gmail, an...
A Collection of Fun and Interesting Google Search Tips
Millions of Facebook Passwords and Other Passwords Stolen in Massive Breach by Pony Botnet Controlle...
Sender Unsubscribe Links Moved to Top in Gmail
Share the knowledge

Number of people who have enjoyed this article: 1,494