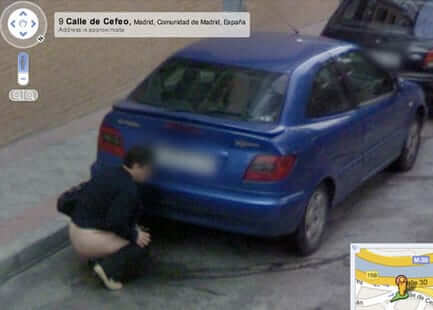 Google’s controversial Street View feature – often accused of invading privacy – is back in the news again.

The Google Street Views are created primarily by compiling thousands of images taken by a team of roving Google StreetView vans equipped with cameras.

After being sued for invasion of privacy over their StreetView van going where the plaintiff felt that it oughtn’t, Google responded by adding their face blurring technology to their StreetView setup.

Apparently, however, faces are not all that they should be blurring.


A few weeks ago, the Google StreetView van caught a woman in Madrid, Spain squatting behind a parked car and, well, relieving herself.

And they published it in their street view!

After cries of outrage, along with a few giggles, Google did depublish the picture.

But publishing it at all was – yes, we have to say it – rather cheeky.

Got the "Earnings at risk - You need to fix some ads.txt file issues to avoid severe impact to your ...
Rosa Hoskins List of Lessons from Dad Bob Hoskins
How to Stop and Get Rid of Adsense Auto Ads and Get Your Old Adsense Ads Back
Google, Microsoft, Yahoo and Facebook Fight Back to Thwart NSA
The Secret to Reducing How Much Storage You are Using in Gmail
Google Announces "Download All of Your Gmail Messages"
Using a Gmail Account in Conjunction with Your AntiSpam Program as the Perfect Spam Folder
Facebook Sued, Settles, for Allowing Underaged Girl to Open Account
women urinating in public
Share the knowledge

Number of people who have enjoyed this article: 42,795