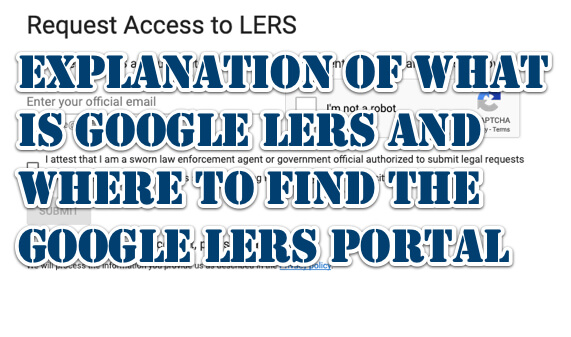 People have been looking to learn about what exactly is Google LERS, and what and where is the Google LERS portal. People also are looking for how to get their law enforcement agency on the Google LERS list of agencies. Here are the answers.

Google LERS stands for the Google Law Enforcement Request System. Google LERS is the portal through which law enforcement personnel can submit a subpoena, court order, or other legal request for information about and data of a Google user. The law enforcement officer (LEO) or other authorized law enforcement agent can also check on where their request is in the process, and it is also where they will be able to download the data once Google processes it.

According to Google, “LERS is a system in which a verified law enforcement agent can securely submit a legal request for user data, view the status of the submitted request, and download the response submitted by Google. If you are a sworn law enforcement agent or other government official who is authorized to issue legal process in connection with an official investigation, you may submit your request through this system.” 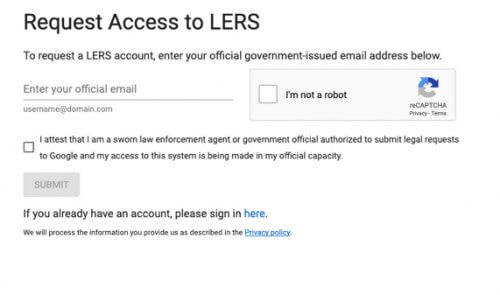 And, in fact, even if you actually have an official law enforcement organization email address, if Google doesn’t have that agency on their list you still can’t get in. For example, in April of 2019 this frustrated person wrote, in the Google help forums:

How can I submit a legal document on LERS? I entered my agency email but have not received anything.

It has been over a week since I attempted to open a LERS account on Google. I have entered my agency email as they asked. A box appeared stating that something would be sent with further instructions via email, but I have received nothing. How do i open a LERS account???

This is also not a new problem – in fact it seems to be an ongoing problem, as, as far back as at least 2017, LEOs have been posting about this same problem.

“I attempted to create a sign in but the site stated I need to get in contact to add my department. I would like any information to make this happen. Thanks,” said someone in March of 2017, in reply to which someone else asked, two months later, “so where do you send the request to have your department added?”

There were very few fully helpful answers to this, however we at the Internet Patrol are nothing if not resourceful, and so we have the answer to that.

Before resorting to submitting a request to have your agency added to the list, try signing up directly through the Google LERS portal, as your agency may already be on the list. You can do that here:

If you discover that Google does not have your agency on their list of authorized law enforcement agencies, either because they reject your email address, or after signing up you get no contact from Google (give it a few days or so), then request that your agency be added to the list.

In order to request that your law enforcement agency be added to the Google LERS list, send an email here:

Woman Widowed by Terror Attack Sues Twitter for Enabling ISIS
How GDPR Affects Individuals in the U.S. and Around the World Including What Rights Individuals Have...
Google Maps Street View Leads to Divorce
Facebook Privacy Disclaimer Not Worth the Paper It's Written On
You May be Owed Money from Paypal in Class Action Settlement for Improper Holds, Reserves, and Suspe...
Man who Killed Wife, and Posted Picture and Confession on Facebook, Convicted of Murder
Why the Subject Line is the Most Important Part of Your Email
Google Launches Google Inbox App - Its Not Your Mother's Gmail
google lers portal, google lers, google law enforcement portal, lers google, google law enforcement portal lers, lers google com, googlelers
Share the knowledge

Number of people who have enjoyed this article: 4,868