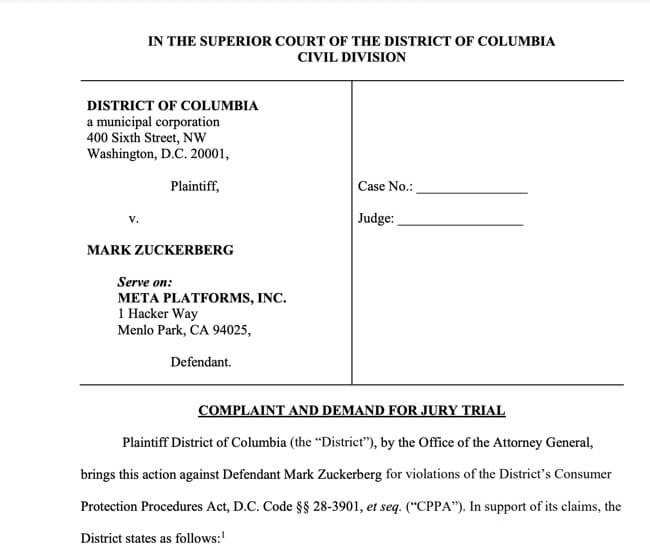 Mark Zuckerberg personally encouraged Cambridge Analytica to exploit the data of 87million Facebook users. That’s the scathing indictment that Washington D.C. Attorney General Karl Racine leveled at Facebook (now Meta) founder Mark Zuckerberg in a lawsuit filed against Zuckerberg today. Painting a picture of an enormous online empire spanning the globe, “Atop it all is Mark Zuckerberg, the unelected leader of a massive digital empire with billions of inhabitants” says the lawsuit.

Thus it is that the Washington D.C. attorney general, Karl Racine, has filed a lawsuit naming Mark Zuckerberg personally as not only a named defendant, but the named defendant.

“The evidence shows Mr. Zuckerberg was personally involved in Facebook’s failure to protect the privacy and data of its users leading directly to the Cambridge Analytica incident. This unprecedented security breach exposed tens of millions of Americans’ personal information, and Mr. Zuckerberg’s policies enabled a multi-year effort to mislead users about the extent of Facebook’s wrongful conduct. This lawsuit is not only warranted, but necessary, and sends a message that corporate leaders, including CEOs, will be held accountable for their actions,” said Attorney General Racine in a statement posted on the D.C. General’s website.

“What is most troubling,” says the lawsuit, “is that Facebook looked into Cambridge Analytica and determined that it posed a risk to consumer data but chose to bury those concerns rather than stop them, as that could have hurt Facebook’s (and Zuckerberg’s) bottom line.”

In fact, the D.C. Attorney General sued Facebook over the Cambridge Analytica debacle in 2018, and it was the stonewalling by Facebook in turning over documents in that lawsuit that, in part, led to this new lawsuit.

Explains AG Racine, “Since filing our landmark lawsuit against Facebook, my office has fought tooth and nail against the company’s characteristic efforts to resist producing documents and otherwise thwart our suit. We continue to persist and have followed the evidence right to Mr. Zuckerberg.”

According to the statement, the lawsuit provides compelling evidence that “Mr. Zuckerberg contributed to Facebook’s lax oversight of user data and implementation of misleading privacy agreements. As a result, it allowed third-parties, such as political consulting firm Cambridge Analytica, to obtain personal data from 87 million Americans, including over half of District residents, and use that data to manipulate the 2016 election.”

Here is the Attorney General’s full statement (also available on the AG’s website here), and below is the full text of the lawsuit.


Full Text of District of Columbia Versus Zuckerberg

How to Improve Your Facebook Experience 1000% with this Simple Free Facebook Tool
Cool Photo Editing Apps That Makes Your Phone Pictures Standout
About the Weird Codes that Appear When You Dictate Something on Facebook from Your iPhone
All About the California Consumer Privacy Act of 2018 - California's Own Version of GDPR: An Overvie...
Woman Using Facebook to Search for Her Long-Lost Father
Miracle Messages Uses Social Media to Reunite Homeless with their Loved Ones
If You're Not Checking Your Facebook Filtered Folder You're Missing Messages
Possible Yelp Shareholder Lawsuit as Stock Tanks After FTC Reveals Subpoenas and Thousands of Compla...
Share the knowledge

Number of people who have enjoyed this article: 49