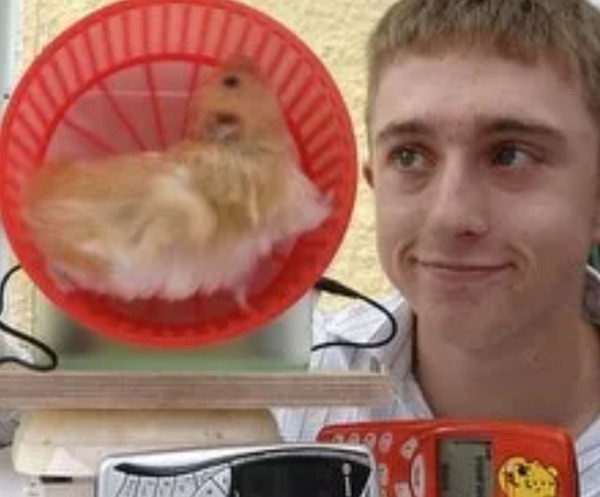 A hamster wheel phone charger has been rigged up to charge a teen’s cell phone. “Powered by hamsters” has been a joke line used by people, especially technophiles and geeks, since, well, since there were hamsters and wheels. However Peter Ash, a teenager from Somerset, England, has taken it quite seriously.

Peter Ash, just 16, decided to harness the energy generated by his pet hamster, Elvis, during Elvis’ nightly turns on the hamster wheel. The diminutive energy dynamo spends up to four hours or more a night on his wheel, explains Ash, so he decided to do something with all of that spare energy.

Ash hooked Elvis’ wheel up to a generator, and started collecting and storing the energy generated by Elvis (now if only someone had thought to do that with the original Elvis!), and used the power created by Elvis to recharge his cellular phone. Ash then submitted the project at school for his GCSE (General Certificate of Secondary Education) electronics requirement (he passed).

According to Ash, he gets a half-hour of talk time for every two minutes which Elvis spends on the wheel.


“Elvis is in his wheel for four or five hours a night, keeping my sister awake. I thought it might as well do something good.”

Aside from the fact that many teenaged brothers might consider “keeping my sister awake” as “doing something good”, Ash is to be commended for his industriousness. Let’s hope that this hamster wheel turns out to be a wheel of fortune for Ash and Elvis.

Now, where can we get one?

Create eBooks to Take Along on Your iPod!
Judge Orders Man to Stop Using AllCaps in Email to Children
How to Stop SMS Text Spam and How to Report SMS Txt Msg Spam
Rosa Hoskins List of Lessons from Dad Bob Hoskins
Working From Home: Why it's Exhausting and What You Can Do About it
You Can Own a Lamborghini for Just $6000 - a Lamborghini Cell Phone that is
7 People You Will Be Surprised to Be Able to Follow on Facebook
ISIS Calls Anonymous 'Idiots' as Anonymous Declares War on ISIS
hamster wheel phone charger
Share the knowledge

Number of people who have enjoyed this article: 10,061