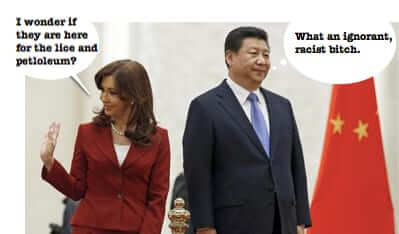 During a diplomatic visit to China, Argentine president Cristina Fernandez Kirchner sent out a tweet mocking the Chinese, and perpetuating the stereotype that native Chinese speakers cannot pronounce the letter R.

The tweet, sent in Spanish from Fernandez’s Twitter account, translates roughly to “More than 1,000 attendees … Did they come for the “The Cámpola” and stay for the lice and petloleum?”

La Cámpora is the name of the youth faction of Fernandez Kirchner’s political party back in Argentina, while “aroz” (or “arroz”) is Spanish for rice, and “petróleo” is Spanish for petroleum. We see what you did there, Madame President. And so does the rest of the free world.

This even eclipses such boneheaded moves as Russian Olympian and official Irina Rodnina tweeting a picture of the Obamas with someone offering President Obama a banana in the foreground, and Booker T. Washington high school (ex) assistant principal Amy Strickland tweeting “Every white father’s nightmare – Or Nah?” above an image of seven interracial couples on their way to prom.

Argentina, which is in some trouble financially, is looking to China for financial assistance, including loans.

According to Asia news site The Straits Times, “Fernandez’s remark on Twitter that the Chinese pronounce the letter ‘r’ as an ‘l’ will be taken by her supporters as a light-hearted joke typical of her folksy style on social media…”

A light-hearted joke, typical of her ‘folksy style’?

Yet, according to Carlos Fara, head of polling company Carlos Fara and Associates, which tracks Fernandez’ ratings in the polls, “She makes a joke, as would any citizen. Beyond whether you think they’re appropriate for a president, they won’t have much impact at home or abroad.”

Bringing Pop-up "Schools in a Box" to Poor Countries Using Tablets and Cell Phones
Russian Official Tweets Racist Obama Tweet of Obamas and a Banana
Scientists Prove Digital Brain to Brain Thought Communication Over the Internet
What is a Virtual Restaurant? With Virtual Restaurants on the Rise We Explain
We Explain Why People are Saying "Tainted Meat" All Over Facebook and Twitter
When Compliments Backfire: The Proudman Carter-Silk LinkedIn Compliment Fiasco
What the #TheEmptyChair Hashtag is All About
UK Report: Mass Interception of Citizen Data Vital to Security
Share the knowledge

Number of people who have enjoyed this article: 3,592