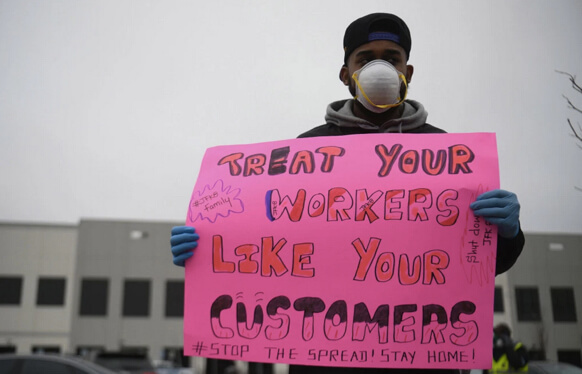 Instacart shoppers and Amazon warehouse workers went on strike yesterday, and today Whole Foods workers have joined them by staging a sickout. The Instacart workers are demanding safer working conditions, such as masks and access to sanitizers and disinfectants, as well as paid leave and better pay for being on the front lines of the Coronavirus pandemic.

In a post on Medium, the GWC said that “For the past several weeks, Instacart Shoppers and Gig Workers Collective have been urging Instacart to take proper safety precautions. We have been ignored. Instead, Instacart has turned this pandemic into a PR campaign, portraying itself the hero of families that are sheltered-in-place, isolated, or quarantined. Instacart has still not provided essential protections to Shoppers on the front lines that could prevent them from becoming carriers, falling ill themselves, or worse,” going on to say that “Instacart has a well established history of exploiting its Shoppers, one that extends years back before our current crisis. Now, its mistreatment of Shoppers has stooped to an all-time low. They are profiting astronomically off of us literally risking our lives, all while refusing to provide us with effective protection, meaningful pay, and meaningful benefits.”

At the same time, some Amazon warehouse workers have also gone out on strike, first and most notably at an Amazon warehouse on Staten Island, following a he said/she said, Coronavirus-style, incident.

Smalls told the Times that “he had advised the colleague, who later tested positive for the coronavirus, to go home immediately, and that he had told management that the center should be closed for two weeks because there was no way to know how many other workers had been infected,” saying that “She had been there the previous week. We don’t know how long she’s been positive.” Smalls also said that other co-workers were displaying symptoms such as fever.

However, Amazon has said that they have fired Christian Smalls, and that they did so because “he had violated social-distancing guidelines multiple times and had come to the site Monday after having been told to stay home, ‘further putting the teams at risk’.”

Smalls told ABC News that he was fired, over the phone, just two hours after he organized the walkout yesterday (that’d be when he “came to the site after being told to stay home”), saying that “We all know this is retaliation. There’s no way around it. I took a huge stand, put my career on the line and I don’t regret it. I don’t know how they even sleep at night for doing that.”

And over at Whole Foods, workers started participating in a Whole Foods Sickout today (Tuesday, March 31st), in solidarity with the Instacart shoppers (Whole Foods also offers a shopper and delivery service; they used to do so through Instacart, and have since taken it in-house), and their Amazon colleagues.

The Whole Worker’s National Organizing Committee, which represents Whole Foods workers or, as they are sometimes called, Whole Workers, called for a “mass sick-out”, urging Whole Foods and other retail employees to call in sick and not go to work. The WWNOC cited instances where two Whole Foods stores and an Amazon (which owns Whole Foods) warehouse have been kept open despite employees at the facilities testing positive for COVID-19.

Said the Whole Worker’s National Organizing Committee, in a statement, “As this situation has progressed, our fundamental needs as workers have become more urgent. COVID-19 poses a very real threat to the safety of our workforce and our customers. We cannot wait for politicians, institutions, or our own management to step in to protect us.”

Call to Arms by the Whole Worker’s National Organizing Committee 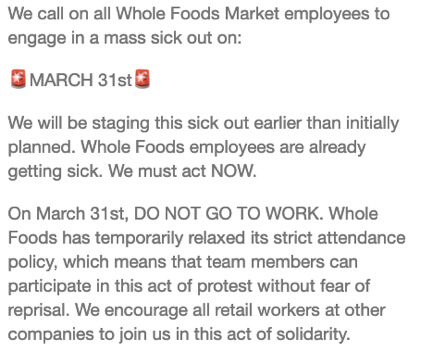 We wonder whether the “without fear of reprisal” will hold true.

The WWNOC’s lists of demands include:

-Guaranteed paid leave for all workers who isolate or self-quarantine instead of coming to work.

-Reinstatement of health care coverage for part-time and seasonal workers.

-Increased FSA funds to cover coronavirus testing and treatment for all team members, including part-time and seasonal.

-Guaranteed hazard pay in the form of double pay during our scheduled hours.
Implementation of new policies that can facilitate social distancing between workers and customers.

-Commitment to ensuring that all locations have adequate sanitation equipment and procedures in place.

-Immediate shutdown of any location where a worker tests positive for COVID-19. In such an event, all workers should continue to receive full pay until the store can safely reopen.

Says the WWNOC “Amazon and its subsidiary Whole Foods dared to keep open an Amazon warehouse and two Whole Foods stores where employees tested positive for COVID-19. We must prioritize the health of our workers over short-term financial gain. We are working harder than we have ever worked. We are putting our lives at risk. We deserve to have our needs met. Let’s make sure it happens.”

Of course, Amazon denies all of the allegations.

As for Instacart? A representative for Instacart told the New York Times “We’ve seen absolutely no impact to Instacart’s operations.”

Which is weird, considering…

Number of people who have enjoyed this article: 1,259