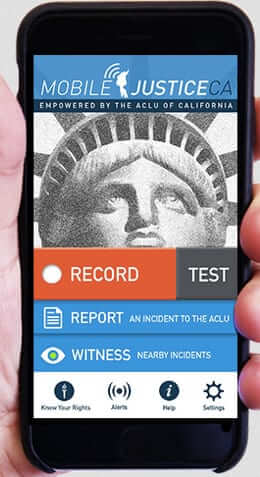 The American Civil Liberties Union (ACLU) has released Mobile Justice apps for eight states and counting. The Mobile Justice app, which records police encounters or brutality as they happen, and automatically uploads them to the ACLU, is available for California, Colorado, Michigan, Mississippi, Missouri, Nebraska, North Carolina and Oregon with more on the way.

Explains Nathan Woodliff-Stanley, Executive Director of the ACLU of Colorado, which is the newest state to have a Mobile Justice app, in an interview with [Page no longer available – we have linked to the archive.org version instead], “As often as cameras are watching what we do, there is often resistance when cameras are pointed in the other direction. We must remember that it is the cameras in our hands, the cameras that most of us carry with us every day, that are the greatest protections against abuses of police power.”


The primary functon of the Mobile Justice app is to record an encounter and then instantly and automatically upload the recording to the ACLU. Proponents say that this will help ensure that videos end up where they can do good, even if the phone subsequently gets dropped in a scuffle and broken, or even if the phone is taken and the video deleted.

In fact, the latter is exactly what Levi Frasier says happened to him, and he wasn’t even the primary focus of the police stop. Frasier says he saw police manhandling a suspect, and so he stopped and started recording the encounter with his tablet. The police noticed, asked if they could have the tablet, and when Frasier said “no”, telling the police that they needed a warrant, they grabbed the tablet from him. When he got it back, he says, the video was gone.

Frasier has filed a lawsuit against the City of Denver, alleging, among other things, violation of his First and Fourth amendment rights, and civil conspiracy.

In addition to the recording function, the Mobile Justice app allows you to file a report with the ACLU, and also has a “witness” function, by which other Mobile Justice users can alert you to police actions in your area.

Says Denise Maes, ACLU Public Policy Director, “Every individual has the right to film police officers… or any other authority doing their job in the public setting. Despite this clear right, there are many challenges. They will order the filming to stop, or in some instances I find more appalling, they’ll confiscate the phone or the actual camera.”

Adds the ACLU’s Legal Director, Mark Silverstein, “By arming citizens with the phone and App, I think people know that they can help witness and document interactions where they believe something questionable might be occurring, and they’re able to send it to people who might be able to evaluate whether this is proper police behavior.”

You can find the Mobile Justice apps for various states for iOS here, and for Android here.

The Mueller Report Online - Full Text of the Mueller Report Including Conclusions
Apple iOS 8 Debuts QuickType, Voice Messages, HomeKit and HealthKit
The Word "Selfie" Official in the Oxford Dictionary
Comparing Google Searches in Areas Where Life is Easy to Where Life is Hard
The Best Free Online PDF to Text Converter
The Truth about the FBI USPS idHSC Voluntary Fingerprint Submission Program
Control Your Car Over the Internet with the Internet Controlled Car!
Twitter Allows Employees to Work from Home Indefinitely