Audio giant Behringer has unveiled the iNuke Boom – an iPod dock sound system that cranks out 10,000 watts, and weighs 700 pounds. The iNukeBoom (not the iNook Boom, that would be from Barnes and Noble) will be officially introduced at next month’s Consumer Electronics Show (CES).

The four-foot high, eight-foot long audio system, which dwarfs its docked iPod, also will have a hefty price tag: $29,999.00.

But while this is a huge (in all senses of the word) publicity stunt, Behringer will take orders for the iNuke Boom, says Mark Wilder, VP of Marketing and Communications for Behringer.

“Everyone is making something small. We said, ‘Let’s make something loud,'” explained Wilder. “I’m not sure our neighbors are going to like us that much,” he added, speaking of their neighbors at CES.

Wilder went on to promise that “We made this one as a prototype, but we will make them and sell them if we take orders for them.”

As to who would buy an iNuke Boom, Wilder opines that it would probably be someone “with a sizable amount of property and wants to throw a party and wants something more elegant than a normal speaker system.”

Here is Behringer’s press release about the iNuke Boom: 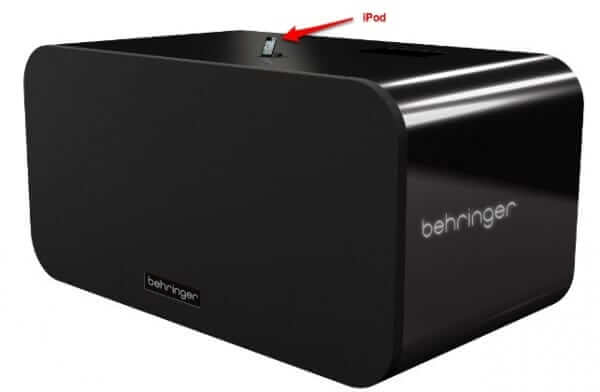 BEHRINGER Explodes into Consumer Electronics Market with 50 New Products plus the iNuke Boom – The World’s Loudest iPhone/iPod Dock with 10,000 Watts of Power

iNuke Boom and all EUROSOUND products will be unveiled at CES 2012 – Central Hall, Booth 15348

Bothell, WA – December 7, 2011 – BEHRINGER, award-winning innovator of affordable professional audio and music equipment, is excited to announce the launch of the EUROSOUND consumer electronics brand — concert quality sound at an amazing value. To celebrate the launch of 50 new consumer audio products, BEHRINGER will unveil the iNuke Boom, the loudest iPad®, iPod® and iPhone® dock you’ve ever heard at CES 2012. The $29,999.99 (manufacturer’s suggested retail price) monster speaker system measures a whopping 8 feet wide by 4 feet tall, weighs over 700 pounds and pumps out over 10,000 Watts of power.

The EUROSOUND line fully embraces a modern, European design while remaining true to BEHRINGER’s roots in professional audio engineering. Four distinct product lines will be marketed under the EUROSOUND name. The Home line brings a professional, live concert sound from the stage into the comfort of your home. EUROSOUND Live products amplify your sound. EUROSOUND Portable products deliver a mobile audio experience anytime, anywhere, while the Creation line proves you don’t have to be a professional musician to make great music.

The underlying quality in all EUROSOUND products is a commitment to delivering high performance audio at an incredible value, something BEHRINGER has been providing to musicians and audio professionals since the company’s inception more than twenty years ago. The BEHRINGER mantra “Double the Features at Half the Price” will also translate to the EUROSOUND products.

“When I started BEHRINGER 22 years ago my goal was to provide musicians with high quality equipment at an affordable price,” said Uli Behringer, founder and CEO of Music Group LLC. “With the launch of EUROSOUND we are challenging ourselves to share the incredible sound and quality we have worked to so hard to craft over the last two decades with all music and audio enthusiasts.”

Songza Dead - was New Songza App Offers Amazing Playlists of Popular Tunes, Giving Pandora a Run for...
Bug in iPhone 4, iPhone 4s and iPhone 5 Running iOS6 Causes Phone to Automatically Start Playing Pod...
Apple iOS 8 Debuts QuickType, Voice Messages, HomeKit and HealthKit
How to Add Lyrics - All of Them! - to Your iTunes Library and Display Them with Your Music on Your i...
Yes, You Can Download All of Your iTunes Purchases Again
How to Display Lyrics for Songs in iOS 7
Is It Ok to Leave Your iPhone Screen On All the Time? Here's the Answer
Apple Patents iPhone Landing Glass Side Up
Share the knowledge

Number of people who have enjoyed this article: 2,979