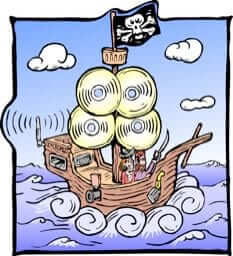 I have a dear family friend who is a fairly well-known recording artist. In fact, he and his group are extremely well known in their particular musical field (think bluegrass-jazz fusion).

He was playing nearby last week, and we had a chance to catch up and chat, and so I asked him for his take on the whole MP3 downloading controversy.

Now, this is a guy, and a group, who regularly invite their audiences to make recordings of their concerts, and to trade them around, and who offer tracks for free downloading on their website. They’ve released at least a dozen albums, many of which have done very well, and won kudos and awards around the world. I figured that he would have both an interesting, and perhaps a somewhat relaxed perspetive on it all.

So, and because I really knew nothing about how this industry worked, I was a bit surprised at the vehemence in his voice, especially as he has a soft-spoken laid back voice, when he responded that illegal music downloads absolutely take money out of his pocket.

He then went on to explain why, and what he told me stunned me (again, because I’d had no idea). If you already know this, it will come as no surprise, but if not, I expect that it will stun you, too:

Recording artists have to pay the studio back for the cost of producing their records.

The recording artists don’t get one red cent out of the sale of an album until the recording studio has recouped the cost of making the album out of the artists’ royalties!

That means that in a best case scenario the album has to sell 60,000 copies before the artist sees anything. Anything. And that is with a mythical production cost of only $100,000.

Now, granted, none of the lawsuits by the RIAA and the MPAA have really been about protecting the artists, despite how they try to position them, and we all know that.

But the fact still remains that if someone acquires the album and someone hasn’t actually paid for it, that’s that much less going towards paying down that production cost, which means that it’s that much less likely that the artist will ever see a dime of their royalties.

According to my friend, as the sale of MP3 devices continues to climb, records sales have dropped by at least 10% across the board. Not that he was blaming MP3 devices on lagging record sales – he wasn’t. But rather we were observing that the drop in record sales didn’t track to other possible indicators of the drop being, say, due to an economic downturn. Rather than an across-the-board drop in sales in related products and industries, the drop seems only to be in record sales.

Is that directly related to the exponential growth in file-sharing? It may be that nobody will ever be able to say empirically.

But what I can say is this. If you are going to download music for free, music which wasn’t intended to be free, take a minute to think about this: if you like them enough to download their music, for gosh sakes don’t take money out of their pocket.

How to Find Your Facebook Payment Settings to Remove a Payment Method from Facebook
Data Broker was Selling Location-Tracking Data of People Visiting Abortion Providers
5 Rising Social Media Platforms to Watch-If You Are Business Minded
Got a Tax Invoice from Intuit Quickbooks? Here's Why
Yes, Facebook's Data Mining is a Problem
Save Money with Our List of the Best Free Streaming Services
Apple Patents iPhone Landing Glass Side Up
Bug in iPhone 4, iPhone 4s and iPhone 5 Running iOS6 Causes Phone to Automatically Start Playing Pod...
Share the knowledge

Number of people who have enjoyed this article: 11,302