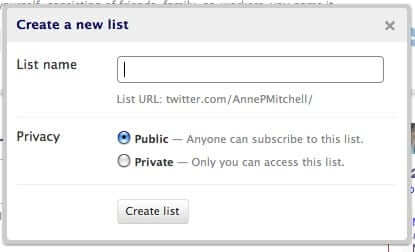 Note: You can also create a new list, or add someone to an existing list, by either going to the list of all of the people you are following or whom are following you – or going to someone’s profile page – and looking for the “Lists” button.

On someone’s profile page, the “Lists” button looks like this:

Once you have created your new list, you can add as many people as you want, and you can also monitor how many people have subscribed to your list.

On the flip side, you may find that you are being added to other peoples’ lists!

Imagine my surprise (not to mention how flattered I was) to find out that shortly after this was rolled out, I was on no fewer than 9 lists created by others!

When you click on the “listed” link, you will be presented with information about all of the lists on which you appear, how many others are listed on those same lists, and how many people are following (subscribed to) those lists. 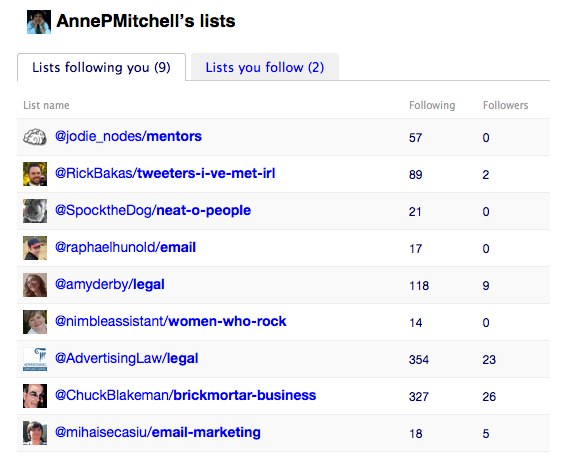 We hope that this explanation of Twitter Lists has been helpful!

Please let us know in the comments below what lists you have created!

How to Change Your Twitter Timeline Back to Chronological Order
How to Protect Your Digital Footprint from Prying Relatives and Friends
Social Media Campaign for Kidnapped Nigerian Girls Using Photos of Wrong Kids
How to Send Group Messages on Twitter
Memes Shared on Twitter Infected with Malicious Code
What You Need to Know about Twitter's New Terms of Service and Shadow Banning, and Rights to Your Co...
Google Webpage Ranking: Do Sentiments Help?
Hater Intentionally Causes Seizure in Epileptic Reporter with "Weaponized Tweet"; Faces Federal Char...
Share the knowledge