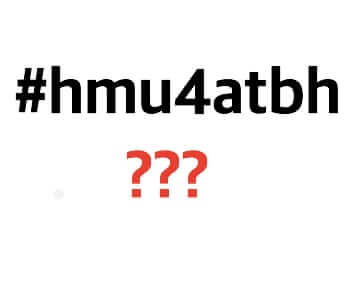 If you’ve been seeing the #hmu4atbh hashtag in your Twitter or newsfeed, and are wondering what it means, we’re here to tell you exactly what #hmu4atbh means. But first, you need to understand a fundamental part of it, as, as you may have imagined, #hmu4atbh stands for a seven-word phrase.

In the past few years, and particularly on Facebook, there is a thing that teens (mostly) do, which is the TBH ‘game’ (for lack of a better word). TBH stands for “to be honest”, and when you are the recipient of a TBH, the person giving it to you tells you something honestly about you, their relationship to you, or something relating to you – generally something nice, and affirming.


Generally it starts with someone posting a variation of “Like for TBH”, and whomever “likes” the post gets a positive stroke about themselves from the poster.

Indeed, “Like for TBH” seems to have given rise to a whole cottage industry of images on Pinterest just for this purpose.

So, now that you know what “tbh” stands for, you can probably figure out what #hmu4atbh stands for, but as you’ve read this far, we’ll tell you.

Amy Strickland - Every School Board's Nightmare or Nah?
Does Private or Incognito Mode Make Browsing Anonymous?
How to Stop Facebook from Posting Your Location (2016)
What You Should Know About WhatsApp's Business App and WhatsApp Business API
Facebook App Scans Sex Registry for Your Facebook Friends
How To Sell on Social Media by Turning Followers Into Customers
If You're Not Checking Your Facebook Filtered Folder You're Missing Messages
The Differences Between Different Types of Facebook Pages