It is one of the sleaziest, creepiest uses for a webcam and the Internet: spying on your room mate while they are having a close encounter of the intimate kind, and broadcasting the fact on Twitter and sharing it through iChat. But it is not a hate crime, even when you announce that you “saw him making out with a dude.” That is the finding of New Jersey Judge Glenn Berman, in sentencing Dharun Ravi to 30 days in jail following Ravi’s actions, and the subsequent suicide of his roommate Tyler Clementi.

“I do not believe he hated Tyler Clementi,” opined Judge Berman. “He had no reason to, but I do believe he acted out of colossal insensitivity.” 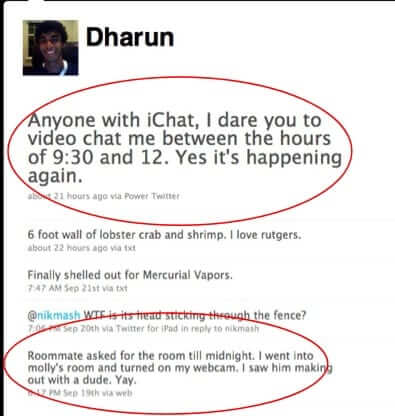 The sentencing sparked both outrage and relief in a divided public who has been following the case, and even among gay advocates, some seeing it as an example of what cyberbullying can lead to, others pointing out that the case is tantamount to a suicide being treated as a murder.

In all, the jury found Ravi guilty of invasion of privacy, bias intimidation of Clementi, and also hindering arrest and witness tampering. Ravi was facing a possibility of as many as ten years in jail, which is why those calling for the maximum penalty were outraged at the 30 day sentence.

The TLDR Act: A Law to Require Online Terms of Service to Have an Intelligible Summary
Google Buzz Lawsuit Reaches Settlement, Google Emails Everyone
Proposed Law Will Fine Credit Agency Data Breaches, Establish Cybersecurity Office at FTC
Colorado Second State to Enact New Consumer Data Protection Law in 90 Days
Latest in Apple FBI iPhone Wranglings: Just 1 Phone Turns Out to Already be at least 12 Phones (plus...
Geofence Warrants and Google's Huge Sensorvault Location Database Provide Law Enforcement with Lists...
Mugshot Sites Sued for Charging for Removal of Mugshots
Teen Prosecuted as Adult for Having Naked Pictures of Himself on His Own Phone
Share the knowledge

Number of people who have enjoyed this article: 2,718