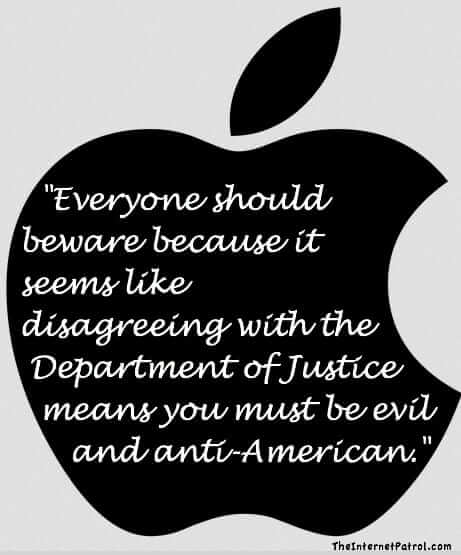 In the latest round over the Feds’ effort to force Apple to help them break into the San Bernardino shooter’s iPhone, and Apple’s refusal to do so, Apple has come out with both fists up. The Feds’ most recent court filing accuses that “Apple’s rhetoric is not only false, but also corrosive of the very institutions that are best able to safeguard our liberty and our rights.” In response, Apple’s general counsel, attorney Bruce Sewell, said during a press conference call that “…it seems like disagreeing with the Department of Justice means you must be evil and anti-American.” (Full text below.)

(Background on the FBI/DOJ versus Apple iPhone case)

In the Goverment’s Response to Apple’s Motion, filed yesterday by Department of Justice (DOJ), the Feds say, among other things, “Apple and its amici try to alarm this Court with issues of network security , encryption, back doors, and privacy, invoking larger debates before Congress and in the news media. That is a diversion. Apple desperately wants — desperately needs — this case not to be ‘about one isolated iPhone.’ ”

Again, in case you missed it, the line in the Fed’s brief that really caught Apple’s attention, and against which Apple struck back publicly, is this one: “Apple’s rhetoric is not only false, but also corrosive of the very institutions that are best able to safeguard our liberty and our rights: the courts, the Fourth Amendment, longstanding precedent and venerable laws, and the democratically elected branches of government.”

{Emphasis added by us.}

Here is the full text of Apple Senior Vice President of Legal and General Counsel Bruce Sewell’s comments during the press conference call:

We received the brief just over an hour ago and honestly we’re still absorbing it but we wanted to get a couple of points out for you guys as you’re working your way through it.

First, the tone of the brief reads like an indictment. We’ve all heard Director Comey and Attorney General Lynch thank Apple for its consistent help in working with law enforcement. Director Comey’s own statement that “there are no demons here.” Well, you certainly wouldn’t conclude it from this brief. In 30 years of practice I don’t think I’ve seen a legal brief that was more intended to smear the other side with false accusations and innuendo, and less intended to focus on the real merits of the case.

For the first time we see an allegation that Apple has deliberately made changes to block law enforcement requests for access. This should be deeply offensive to everyone that reads it. An unsupported, unsubstantiated effort to vilify Apple rather than confront the issues in the case.

Or the ridiculous section on China where an AUSA, an officer of the court, uses unidentified Internet sources to raise the spectre that Apple has a different and sinister relationship with China. Of course that is not true, and the speculation is based on no substance at all.

To do this in a brief before a magistrate judge just shows the desperation that the Department of Justice now feels. We would never respond in kind, but imagine Apple asking a court if the FBI could be trusted “because there is this real question about whether J. Edgar Hoover ordered the assassination of Kennedy — see ConspiracyTheory.com as our supporting evidence.”

We add security features to protect our customers from hackers and criminals. And the FBI should be supporting us in this because it keeps everyone safe. To suggest otherwise is demeaning. It cheapens the debate and it tries to mask the real and serious issues. I can only conclude that the DoJ is so desperate at this point that it has thrown all decorum to the winds….

We know there are great people in the DoJ and the FBI. We work shoulder to shoulder with them all the time. That’s why this cheap shot brief surprises us so much. We help when we’re asked to. We’re honest about what we can and cannot do. Let’s at least treat one another with respect and get this case before the American people in a responsible way. We are going before court to exercise our legal rights. Everyone should beware because it seems like disagreeing with the Department of Justice means you must be evil and anti-American. Nothing could be further from the truth.

Regardless of how you see this issue, or on which side of it you fall, it’s definitely time to pull up a chair and break out the popcorn.

Safari Opening Even Though it's Not Your Default Web Browser? Here's How to Set Your Default Web Bro...
Yahoo Chat Rooms: You Must Be Over 18 Now
Full Text and Content of DOJ Affidavit Used to Get the Search Warrant for Trump Mar-a-Lago
iPhone "Shake the Baby Until it Shuts Up and Dies" Game Approved by Apple
Yes, You Can Download All of Your iTunes Purchases Again
The Aereo Supreme Court Decision in Plain English
UK Report: Mass Interception of Citizen Data Vital to Security
Apple Pay Later Coming in iOS 16: Buy Over Time, No Interest!
Share the knowledge

Number of people who have enjoyed this article: 1,372