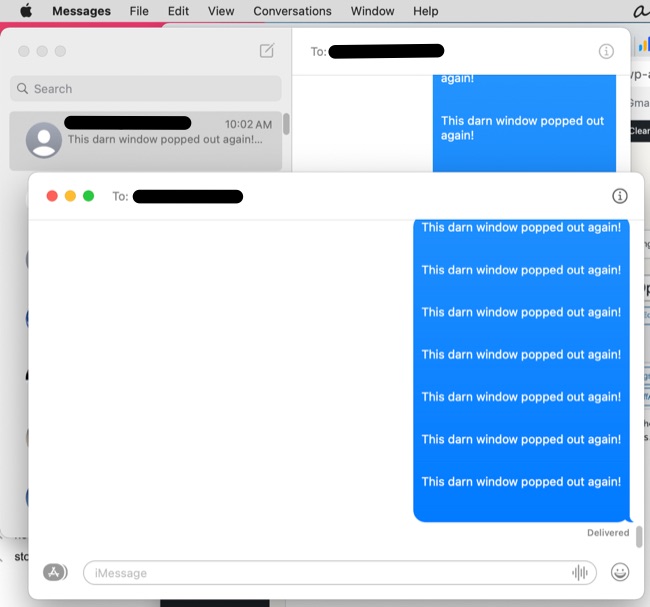 It has been the bane of Mac users’ existences ever since Big Sur: how to prevent Messages from opening a new chat window when you click on a new message that has arrived? Starting with Big Sur, double clicking, or even just newly clicking, on a new message in Messages (formerly iMessage) when transitioning from any other app causes the new message to be opened in a new window, rather than it just going to the message within the Messages list. This happens whether you have your trackpad set to “tap to click” or you have your trackpad set to require an actual physical click (well, even those aren’t actually physical, so we guess that we should say “actual simulated physical click”).

The Problem: That Darned New Window 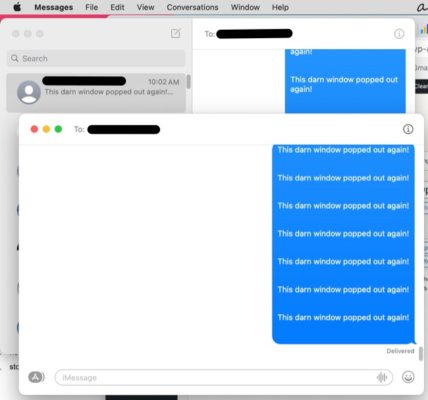 As you can see in the image above, we’ve clicked on a newly arrived message, and it has opened a new window; so frustrating!

A lot of articles dealing with this issue suggest using Command-W to close the newly opened window. That does work, but we were looking for a solution to keep the window from opening in the first place. I.e. to keep that d*mned window from opening at all! And we’ve found it. Coincidentally, it still involves the use of the Command key. (That’s the ⌘ key.)

You probably already know, but may not have thought about, what happens when you press the keys Command-Tab. That invokes the Mac App Switcher, which, when you press Command and Tab together, appears as a horizontal bar in the middle of your screen, with the icons of all of the apps which are currently open; click on the icon for an app (or alternatively just keep hitting the Tab key while holding down the Command key until the icon of the app to which you want to switch is highlighted), and it brings that app to the foreground (do you see where we’re going with this?)

So, when you get a new message, while in another app, instead of immediately clicking on Messages, instead hit Command-Tab and click on the Messages icon. That will bring the Messages app to the foreground without actually having clicked directly on Messages! Then you can click on that new message, and it will behave itself, staying contained where it should instead of popping out a new window! 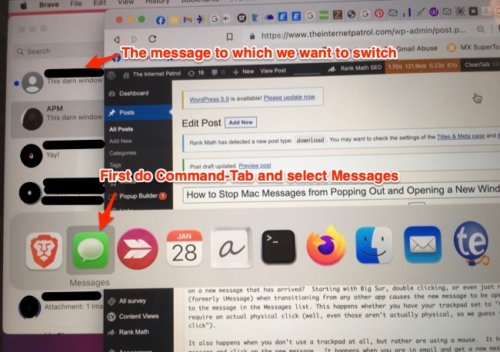 As we said, while these workarounds don’t entirely fix the issue, they do do away with the annoying new message windows opening and having to close them. We have tested these methods extensively with our Mac systems, and they work every time! We hope that they work for you!

Authors and Publishers: How to Opt Out of Amazon's Kindle Lending Service for Your Kindle Book
How to Cancel or Close a Payloadz Account
San Bernardino DA Suggests "lying dormant cyber pathogen" on Shooter's iPhone
How to Block, Opt Out of and Remove Ads by Adblade
Adobe Flash Installer Hanging at 90%? Here's How to Fix It
How to Get Rid of Those Damn Gmail Tabs
How to Remove Cookies from Your System for All Browser Types
How to Disable Command-Q to Stop it from Closing Your Apps on Your Mac
Share the knowledge

Number of people who have enjoyed this article: 292