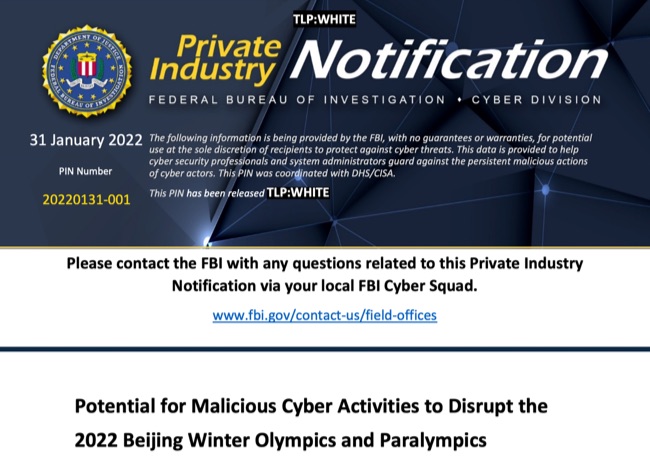 The FBI is warning U.S. Olympic athletes who are attending the 2022 Olympics in Beijing, China, to leave their cell phones at home, and instead pick up and bring temporary mobile phones, so-called ‘burner phones’ or disposable phones. The warning, put out last night (January 1, 2022), came from the FBI’s Cyber Division, and was announced as a warning to private industry. While the warning was also geared towards network operators and other industries, the warning specifically, and unusually, speaks directly to individuals as well, saying “the FBI warns Olympic participants and travelers of potential threats associated with mobile applications developed by untrusted vendors. The download and use of applications, including those required to participate or stayin country, could increase the opportunity for cyber actors to steal personal information or install tracking tools, malicious code, or malware. The FBI urges all athletes to keep their personal cell phones at home and use a temporary phone while at the Games (emphasis ours). The National Olympic Committees in some Western countries are also advising their athletes to leave personal devices at home or use temporary phones due to cybersecurity concerns at the Games.”

It is specifically the requirement that Olympic athletes download mobile apps onto their phones during their stay in China to which that part of the warning speaks, and why the FBI is advising U.S. Olympic athletes to not take their regular personal phones with them, but to instead take a “temporary” (disposable) phone for this one use.

The FBI is warning entities associated with the February 2022 Beijing Winter Olympics and March 2022 Paralympics that cyber actors could use a broad range of cyber activities to disrupt these events. These activities include distributed denial of service (DDoS) attacks, ransomware, malware, social engineering, data theft or leaks, phishing campaigns, disinformation campaigns, or insider threats, and when successful, can block or disrupt the live broadcast of the event, steal or leak sensitive data, or impact public or private digital infrastructure supporting the Olympics. Additionally, the FBI warns Olympic participants and travelers of potential threats associated with mobile applications developed by untrusted vendors. The download and use of applications, including those required to participate or stay in country, could increase the opportunity for cyber actors to steal personal information or install tracking tools, malicious code, or malware. The FBI urges all athletes to keep their personal cell phones at home and use a temporary phone while at the Games. The National Olympic Committees in some Western countries are also advising their athletes to leave personal devices at home or use temporary phones due to cybersecurity concerns at the Games. The FBI to date is not aware of any specific cyber threat against the Olympics, but encourages partners to remain vigilant and maintain best practices in their network and digital environments.

As we mentioned in PIN 20210719-001, large, high-profile events provide an opportunity for criminal and nation-state cyber actors to make money, sow confusion, increase their notoriety, discredit adversaries, and advance ideological goals. Due to the ongoing COVID-19 pandemic, no foreign spectators will be allowed to attend the Olympics or Paralympics. Spectators will be reliant on remote streaming services and social media throughout the duration of the Games. Adversaries could use social engineering and phishing campaigns leading up to and during the event to implant malware to disrupt networks broadcasting the event. Cyber actors could use ransomware or other malicious tools and services available for purchase to execute DDoS attacks against Internet service providers and television broadcast companies to interrupt service during the Olympics. Similarly, actors could target the networks of hotels, mass transit providers, ticketing services, event security infrastructure or similar Olympic support functions.

For example, during the 2020 Tokyo Olympics and Paralympics, the NTT Corporation––which provided its services for the Tokyo Olympic & Paralympic Games––revealed there were more than 450 million attempted cyber-related incidents during the event, though none were successful due to cybersecurity measures in place. While there were no major cyber disruptions, the most popular attack methods used were malware, email spoofing, phishing and the use of fake websites and streaming services designed to look like official Olympic service providers. In addition, the use of new digital infrastructure and mobile applications, such as digital wallets or applications that track COVID testing or vaccination status, could also increase the opportunity for cyber actors to steal personal information or install tracking tools, malicious code, or malware. Athletes will be required to use the smartphone app, MY2022, which will be used to track the athletes’ health and travel data.

The FBI encourages service providers and other relevant partners to maintain business continuity plans to minimize essential service interruptions. Given the increase in remote work environments and increased use of digitalized infrastructure, to include the use of Virtual Private Network (VPS) services, the FBI encourages regularly monitoring networks and employing best practices. The FBI also suggests reviewing or establishing security policies, user agreements, and patching plans to address current threats posed by malicious cyber actors.

The FBI does not recommend paying ransoms. Payment does not guarantee files will be recovered and may embolden malicious cyber actors to target additional organizations, encourage other criminal actors to engage in the distribution of malware, and/or may fund illicit activities. Regardless of whether the ransom was paid, the FBI urges organizations to report ransomware incidents to a local FBI field office or file a report with the FBI’s Internet Crime Complaint Center (IC3) at IC3.gov. In addition to the above network best practices, the FBI also recommends the following:

• Maintain offline, encrypted backups of data. Regularly test those backups and keep them current.
• Create, maintain, and exercise a basic cyber incident response plan that includes procedures for
response and notification in a ransomware incident and plans for the possibility of critical systems
being inaccessible for a period of time.
User Awareness Best Practices
• Provide end user awareness and training. To help prevent targeted social engineering,
ransomware, and phishing scams, ensure that employees and stakeholders are aware of potential
cyber threats and how they are delivered. Also provide users with training on information security
principles and techniques.
• Employee knowledge of reporting procedures. Ensure that employees are aware of what to do and
who to contact when they see suspicious activity or suspect a cyberattack, to help quickly and efficiently
identify threats and employ mitigation strategies.

The FBI encourages recipients of this document to report information concerning suspicious or criminal activity to their local FBI field office. Field office contacts can be identified at www.fbi.gov/contact-us/fieldoffices. When available, each report submitted should include the date, time, location, type of activity, number of people, and type of equipment used for the activity, the name of the submitting company or organization, and a designated point of contact.

This product is marked TLP:WHITE. Subject to standard copyright rules, the information in this product may be shared without restriction.

Note that the “TLP” stands for Traffic Light Protocol, a protocol which was originally developed by the UK government, and has since been adopted elsewhere, including in the United States. It employs the use of the three colors in a traffic light (green, yellow, red) as well as white, which represent four different levels of disclosure restriction (or lack thereof). TLP:RED indicates “Not for disclosure, restricted to participants only.” TLP:YELLOW means “Limited disclosure, restricted to participants’ organizations.” TLP:GREEN is used when the information is for “limited disclosure, restricted to the community.” TLP:WHITE, which is the level that the FBI advisory above carries, means that disclosure is not limited to anyone at all and may be shared without restriction.

Google Lens and How To Use It To Identify Things In Your Daily Life
iPhones Not Sending Text Messages to Android Phones Sparks iMessage Lawsuit
Feinstein Says CIA Snuck on Computers, Deleted Documents - Why is Anyone Surprised?
How IoT is Taking Over the Healthcare Industry
Adobe Hacked, Sends Notice to Millions to Reset Passwords
Scammers Run Up Your Cell Phone Bill with One Ring - Read How They Do It
Don't Click On or Open Screenshot[.]photos Links!
Skype Translator Brings Us One Step Closer to an Actual Babel Fish
Share the knowledge

Number of people who have enjoyed this article: 78